Adam Devine and Chloe Bridges Get Married in Cabo 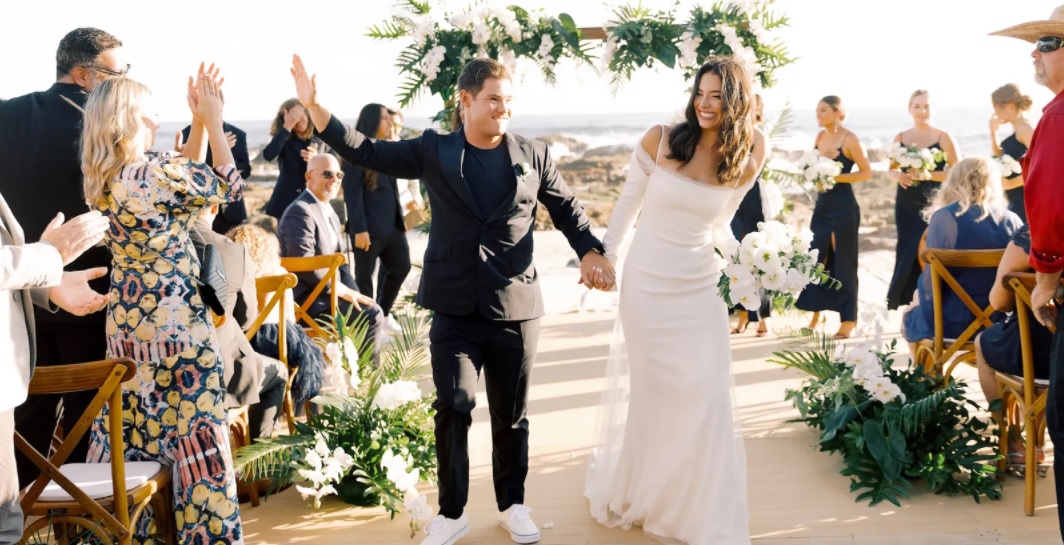 We were beyond thrilled to plan and design Adam Devine and Chloe Bridges’ recent wedding at Esperanza Resort in Los Cabos. As you can imagine, they were delightfully fun to work with! In these beautiful photos from our friend Lucy Munoz you will see the joy and love in every frame. We invite you to take a look below as you read the story of their wedding proposal and destination wedding celebration as recently seen in Vogue Magazine.

As featured in Vogue:

“Pitch Perfect and Workaholics star Adam Devine and fellow actor Chloe Bridges first met on a flight to film their 2015 movie, The Final Girls, in Louisiana. Sound like a meet-cute worthy of a rom-com? Eh, not quite. The two barely spoke and Adam played four hours of Fruit Ninja on his iPad instead. “I was scared of Chloe’s beauty,” he says. “Chloe thought I was big timing her.” (Big timing, by the way, is when someone acts like they’re too cool to acknowledge you.)

The Best Day Ever

He very much wasn’t. The two became a couple and eventually settled down together in Newport Beach, California. Come October 19, 2019, Adam was ready to propose out on their Duffy boat in Newport Bay. Those years-dormant airplane nerves, however, hit again. Morning of, Chloe woke up to Adam staring straight into her eyes. “I was a total weirdo,” he recalls. “She was like, ‘What are you doing?’ I just kept telling her that this was going to be the best day ever.” Adam doesn’t remember what he said while popping the question, describing himself as “totally blacked out from nerves.” But he does remember that Chloe said yes.

Originally, the couple was supposed to get married in a 200-person ceremony in September 2021 at Orange Country’s Resort at Pelican Hill. But after the venue postponed all of the year’s events due to the pandemic, the couple switched to a smaller, COVID-era affair at Esperanza, a resort in Cabo San Lucas. They enlisted the help of event planner Elena Damy. “Elena and her team were a godsend. They are always so positive and really made us feel like everything was going to work out,” says Chloe.

Even though the location, guest list, and, well, the entire concept of their wedding changed, one thing never wavered: the bride’s dress. Chloe knew from the beginning that she wanted to wear something by designer Danielle Frankel. “I tried on about six Danielle dresses and honestly, it was a very hard choice—each was uniquely perfect. I ultimately ended up going with the one I did because it felt the most elegant and timeless, while still being cool and unique,” she says. “Although I picked my dress back when it was going to be a more formal affair at Pelican Hill, I refused to part with it even when we switched to a beach wedding.”

“The planning process is a million different tiny decisions, and in the midst of all that chaos I felt like the dress was the one thing that I was completely sure about,” Chloe adds.

The weekend of October 8, around 90 guests, including Rebel Wilson and Adam’s Workaholics co-stars Blake Anderson and Anders Holm (who also served as groomsmen), headed down to Los Cabos. The lead-up was, the couple admits, a bit fraught as Adam and Chloe got breakthrough COVID-19 a few weeks before their wedding. “We thought we might have to cancel everything,” Adam says. Luckily, they had enough time to complete their quarantine, and the rest of the attendees tested negative upon arrival for Friday night’s welcome drinks.

On Saturday, the ceremony took place on Esperanza’s private, scenic beach. In addition to her Danielle Frankel dress, Chloe put on Jimmy Choo heels and earrings by Jennifer Behr. She wore her hair down and asked makeup artist Kerrie Urban for a natural look. Meanwhile, Adam donned a custom navy suit by Richfresh, Vans embroidered with “MR,” and a Rolex Submariner Chloe gave him as a wedding gift. Their friend and Adam’s comedy tour opener, Adam Ray, acted as the officiant.

Writing Their Own Vows

It was imperative to Chloe that they both wrote their own vows. “This part was really important to me—whenever I’m at a wedding and the couple doesn’t say their own personal vows, I’m always left wanting more,” she says. The bride got through hers easier than the groom. “I cried the whole damn time,” Adam says. “I didn’t expect that, but seeing Chloe in her gown was all it took.”

The whole ceremony lasted a short-and-sweet 20 minutes. “I felt so present and so surrounded by love,” Chloe says.

Afterward, everyone made their way to a sit-down dinner overlooking the Pacific Ocean. The tables were adorned with white lisianthuses, ranunculus, phalaenopsis orchids, roses, and greenery, all placed on natural fabric runners. Guests dined on traditional Mexican Talavera plates. For the reception, Chloe changed into a two-piece set designed by Olima and her stylist, Mercedes Natalia, as well as a satin bag by Room Shop Vintage. The final touch? A pair of Vans that read “MRS” to match Adam’s.

An explosion of fireworks marked the start of an animated dance party. “At one point our friend Tré Cool from Green Day got on the drums, and Adam and his dad got up on stage with him,” Chloe says.

“We danced so hard. You can tell how much fun we were having by the amount of sweat in the photos,” Adam adds. ‘It was a blast.'” 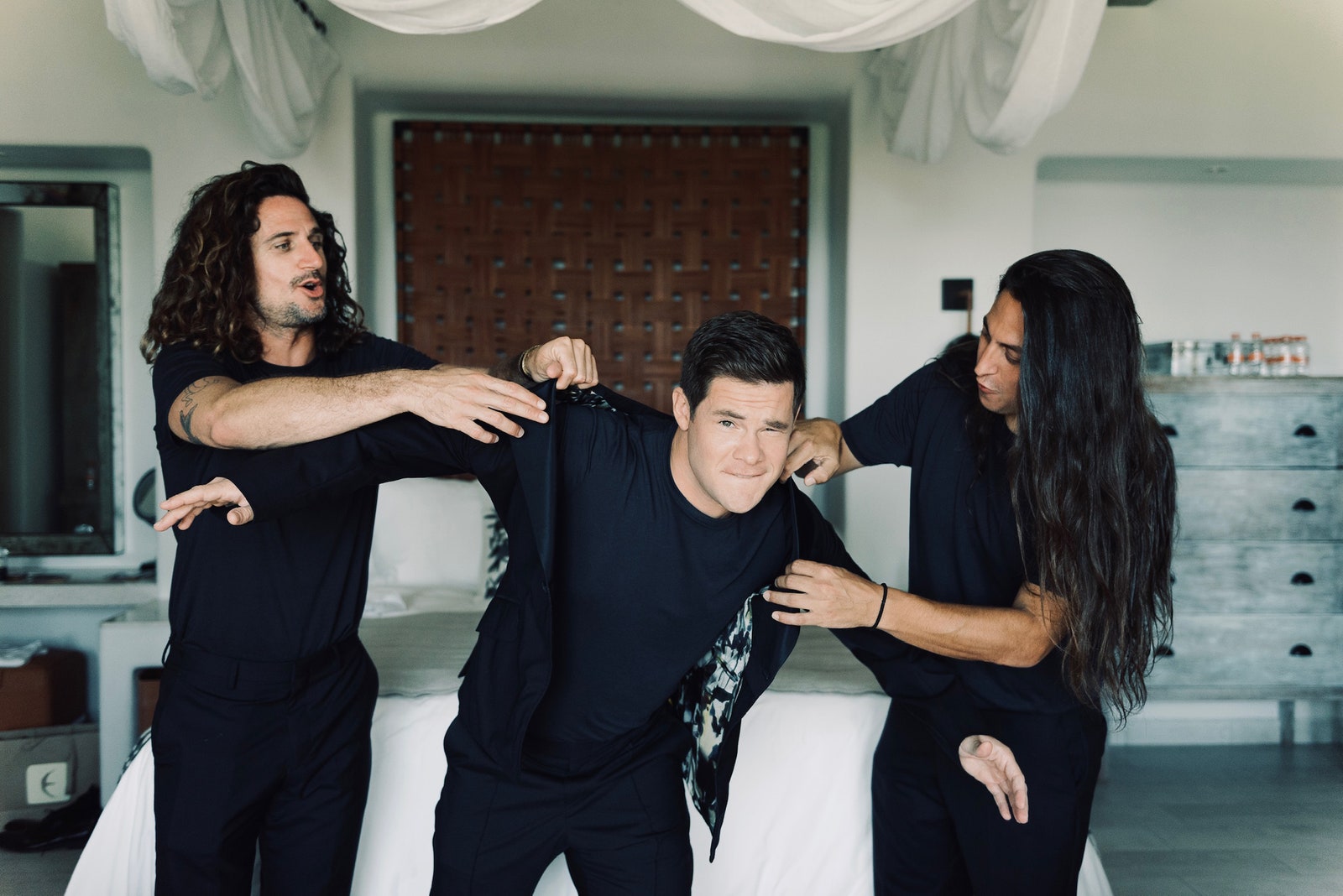 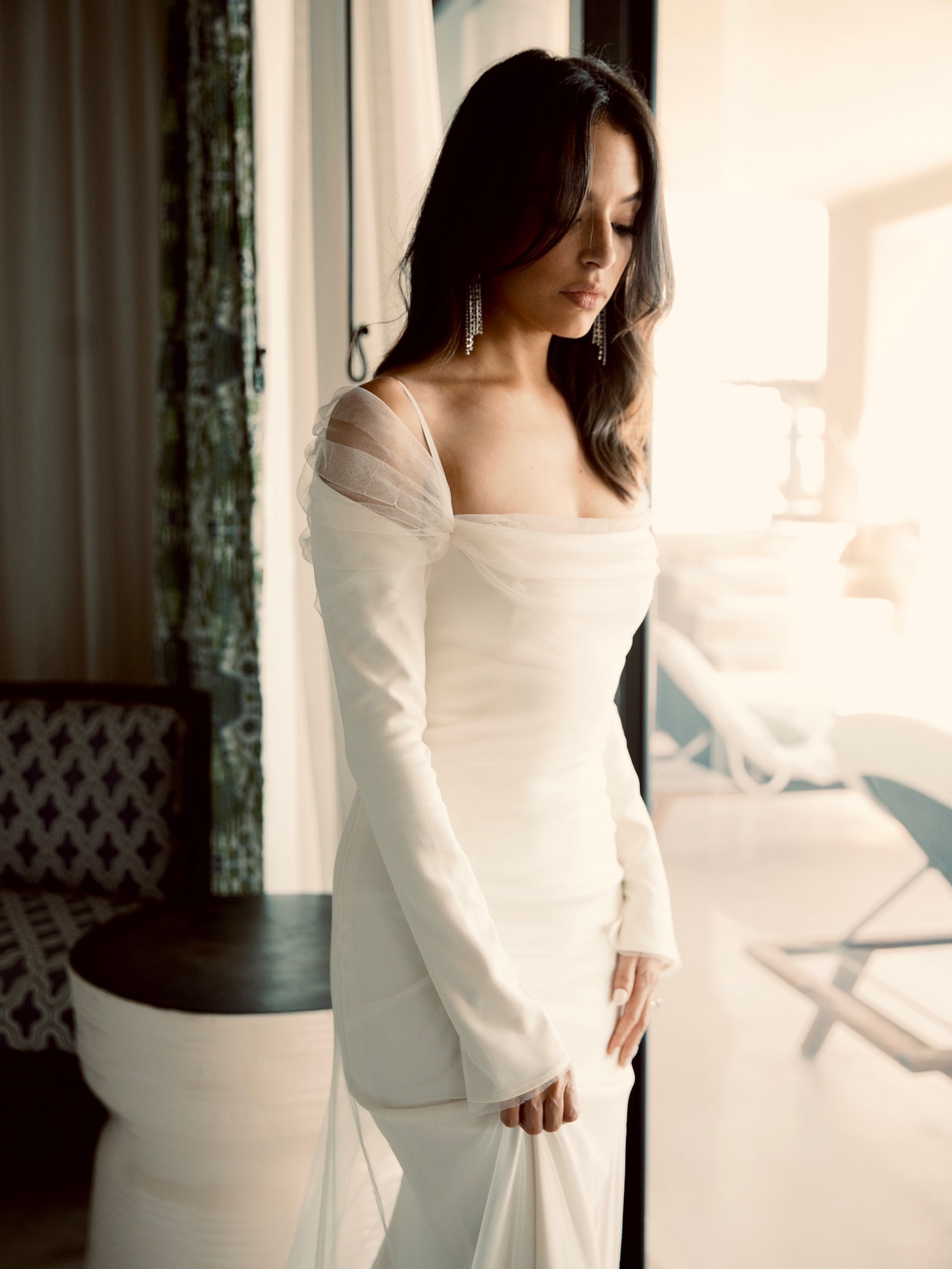 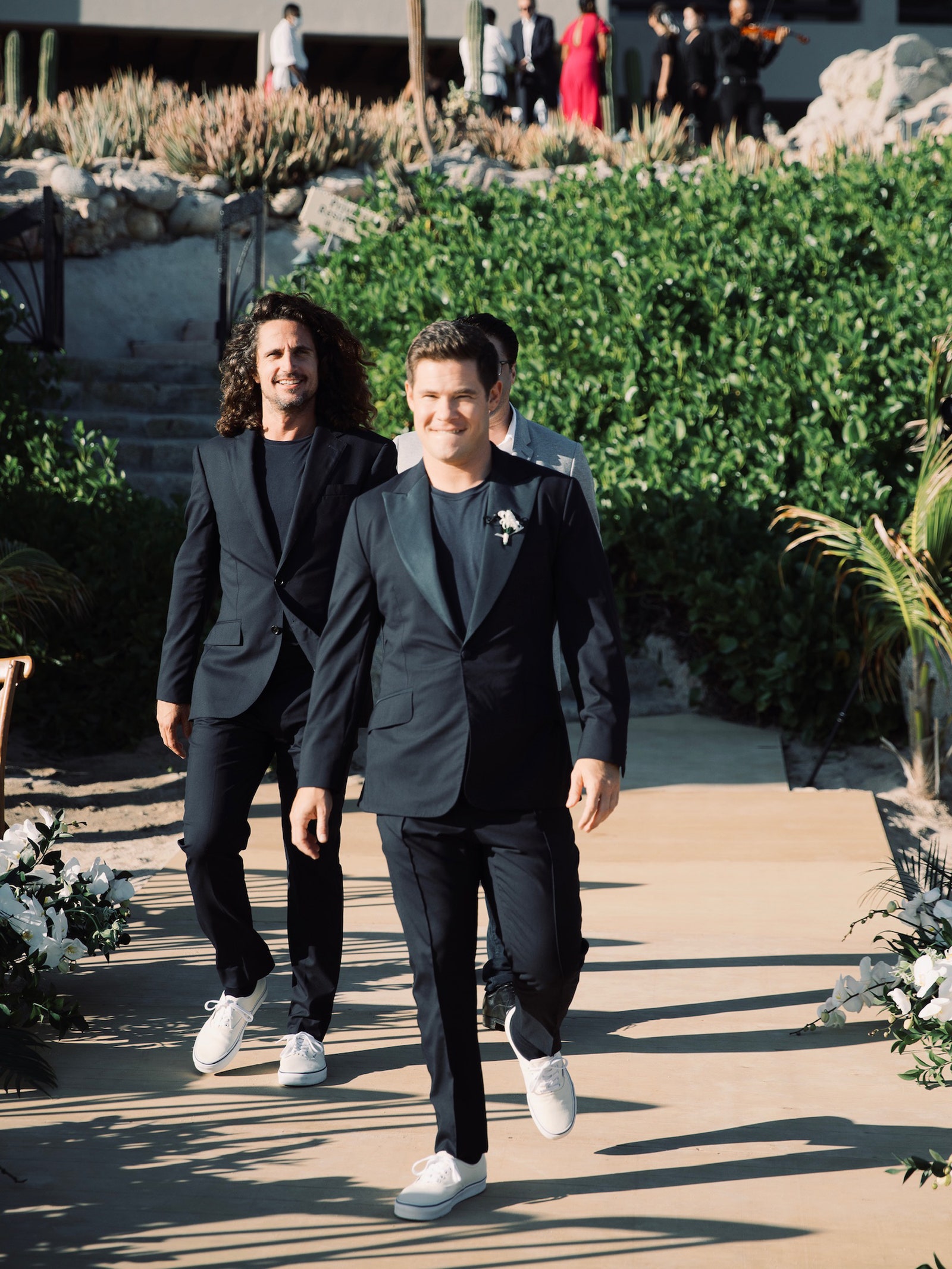 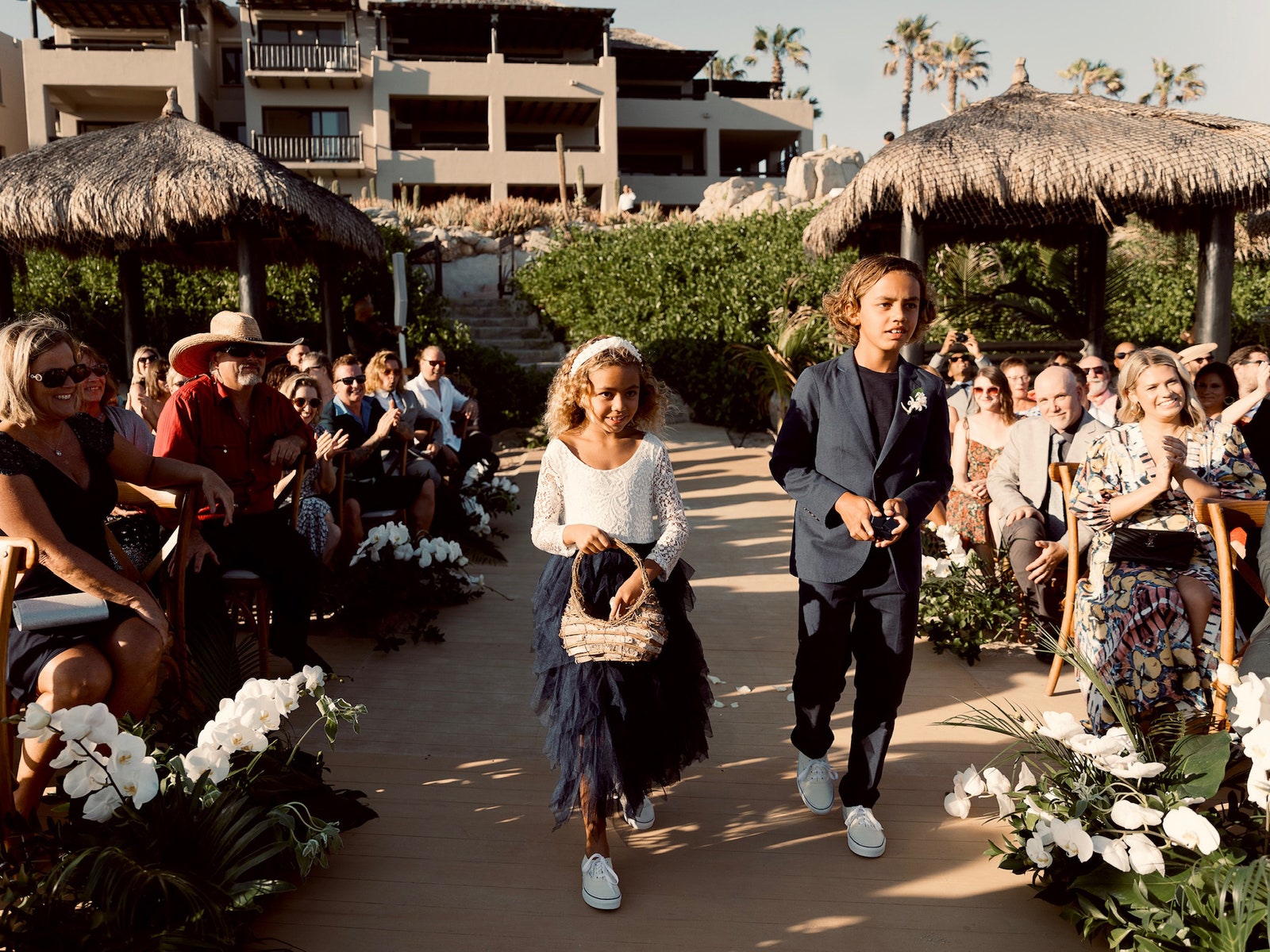 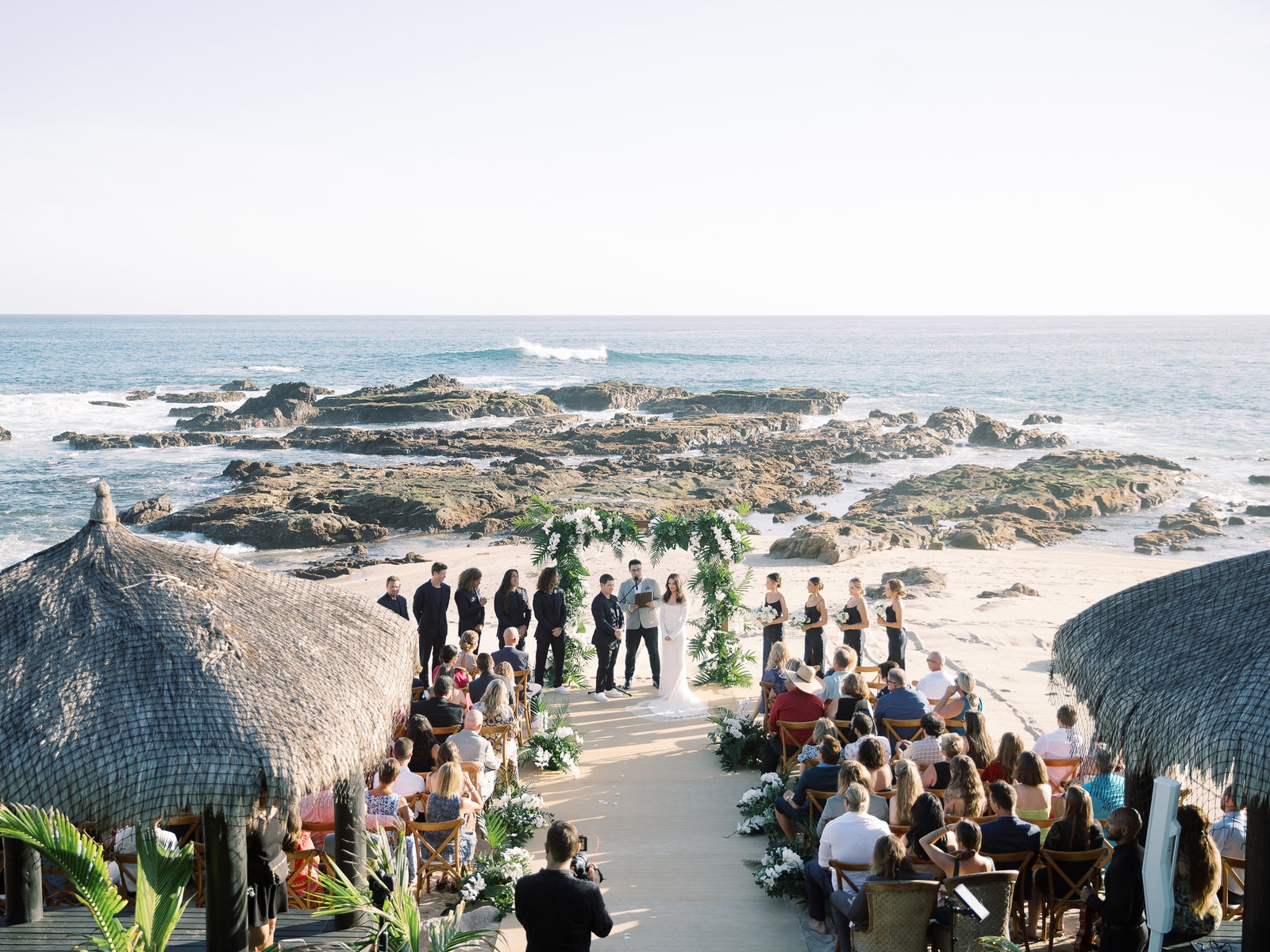 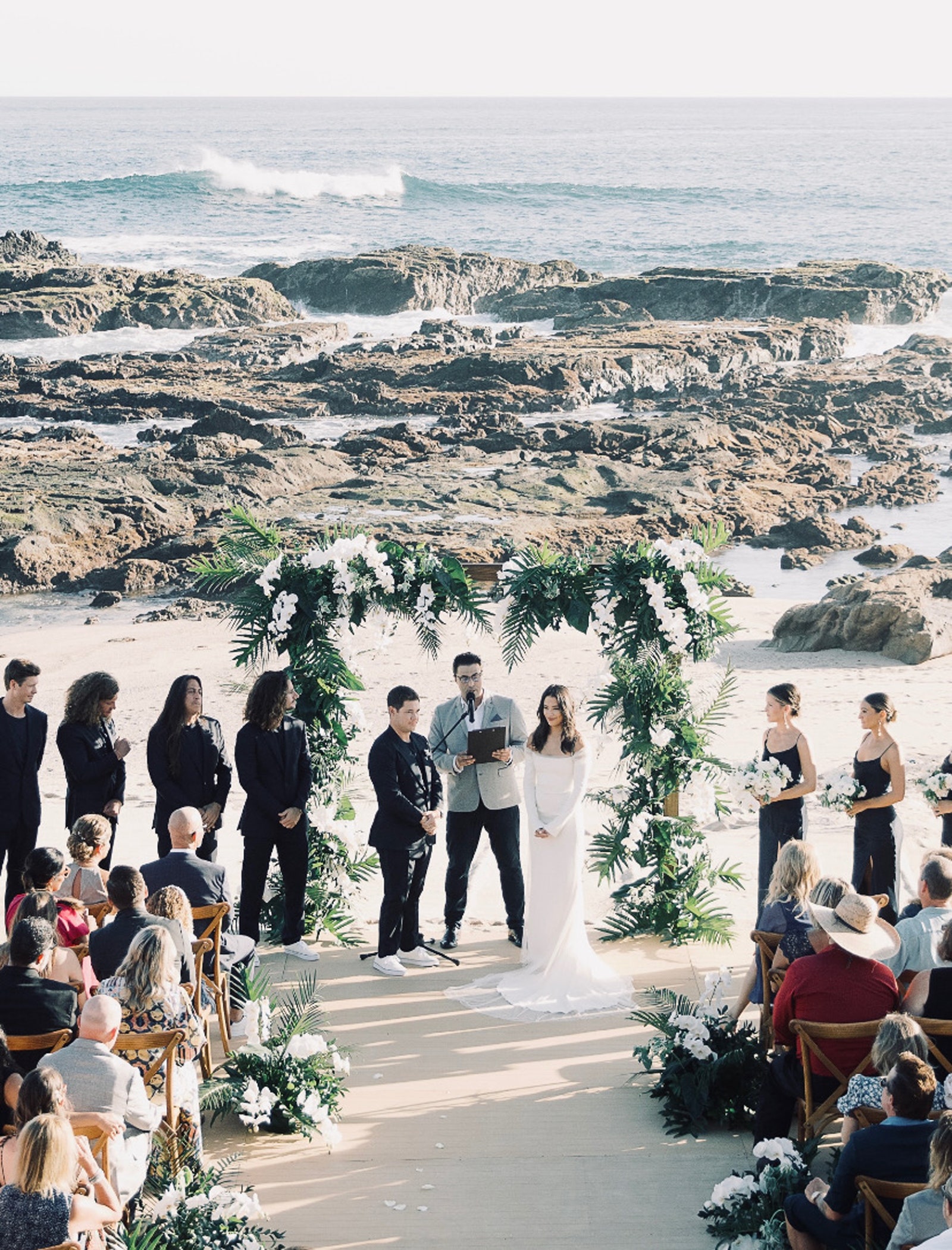 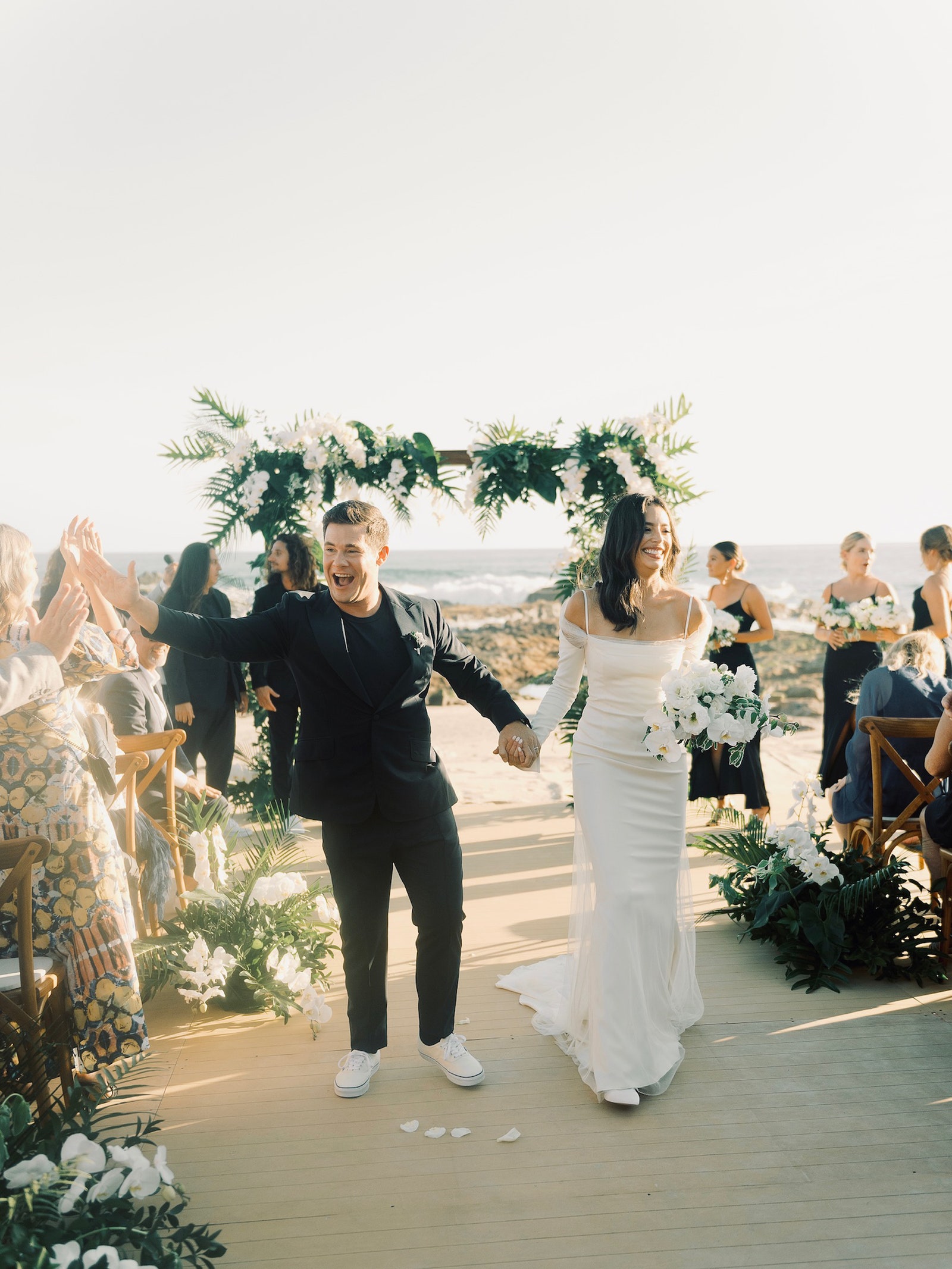 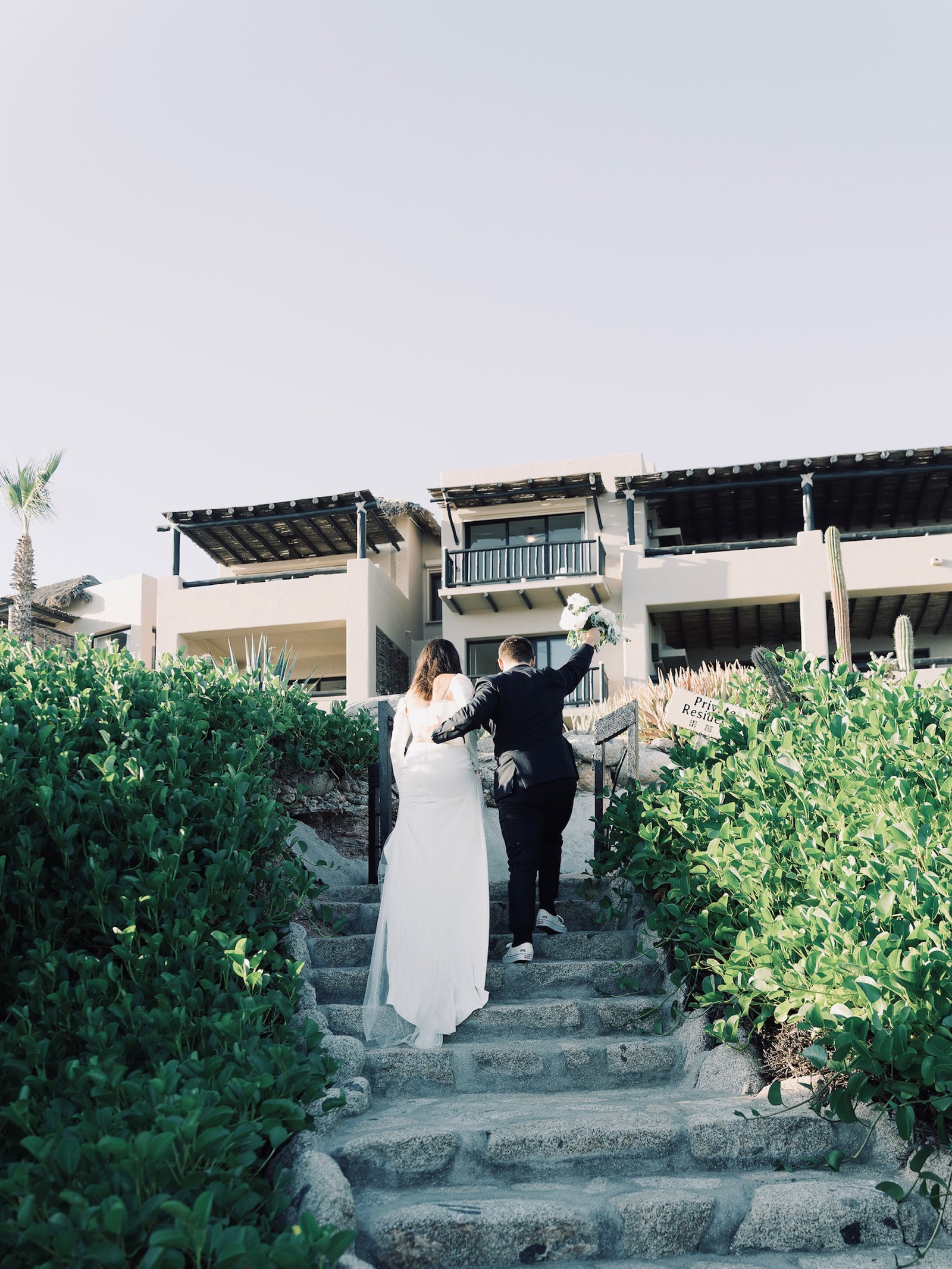 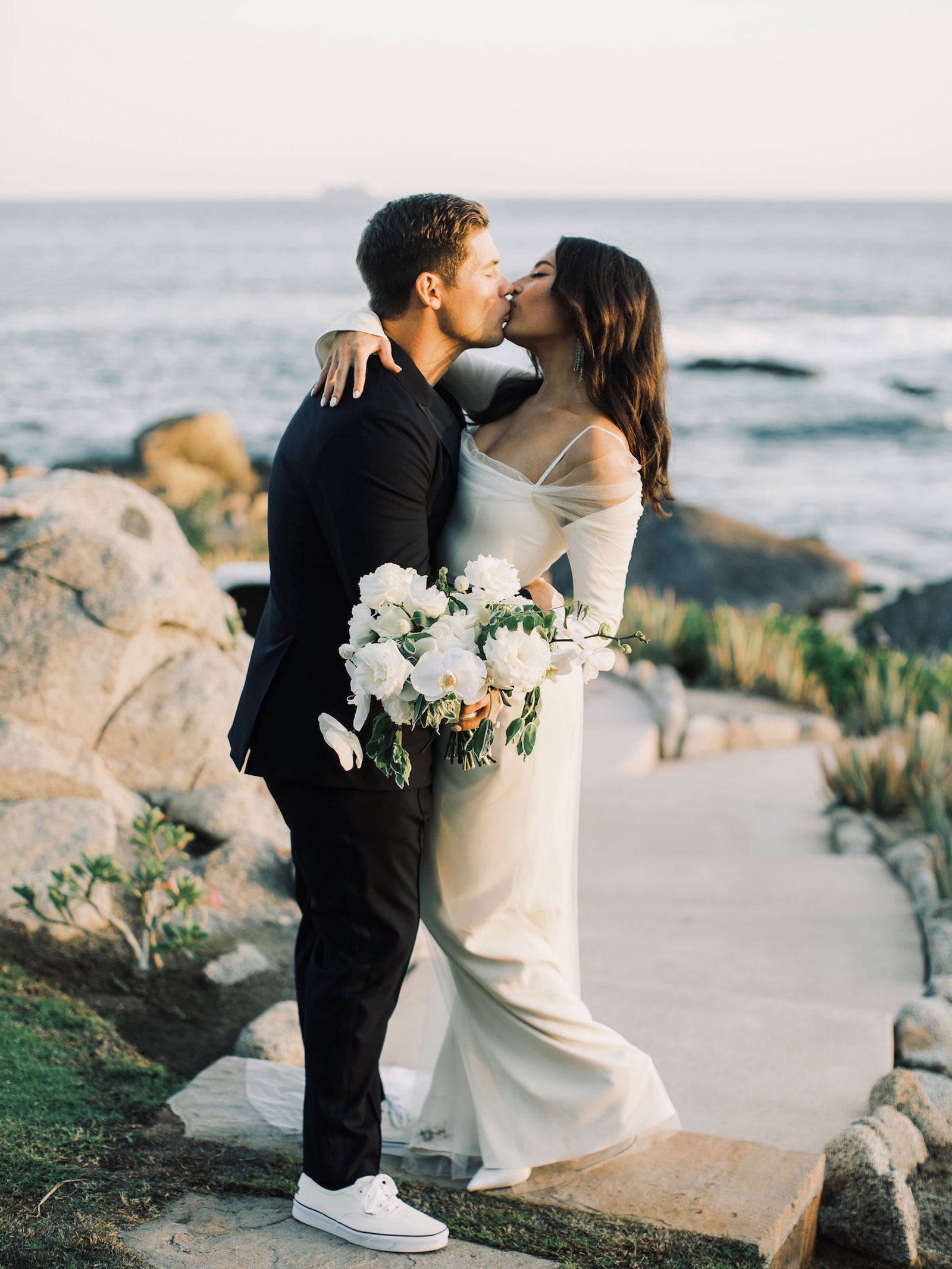 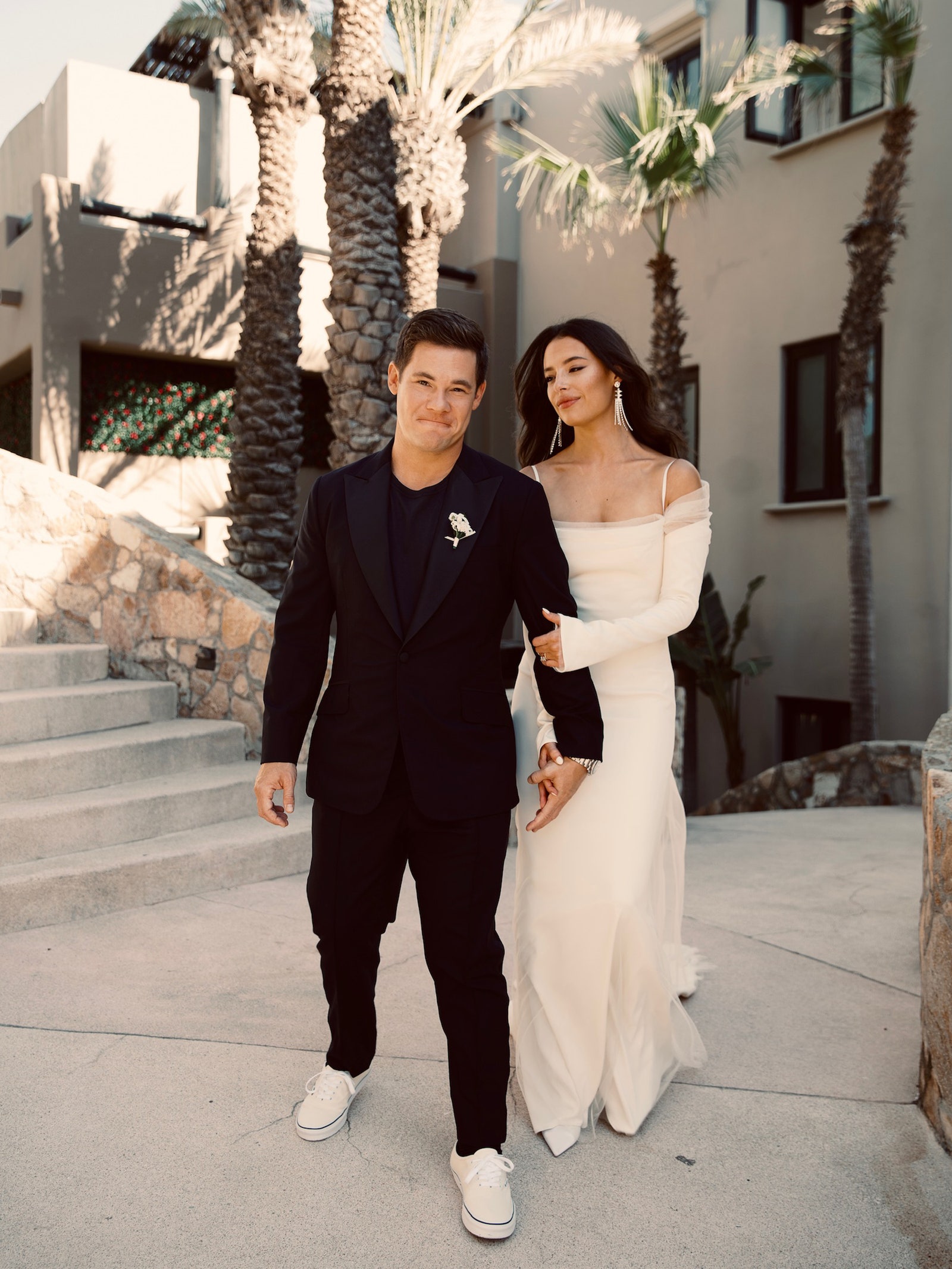 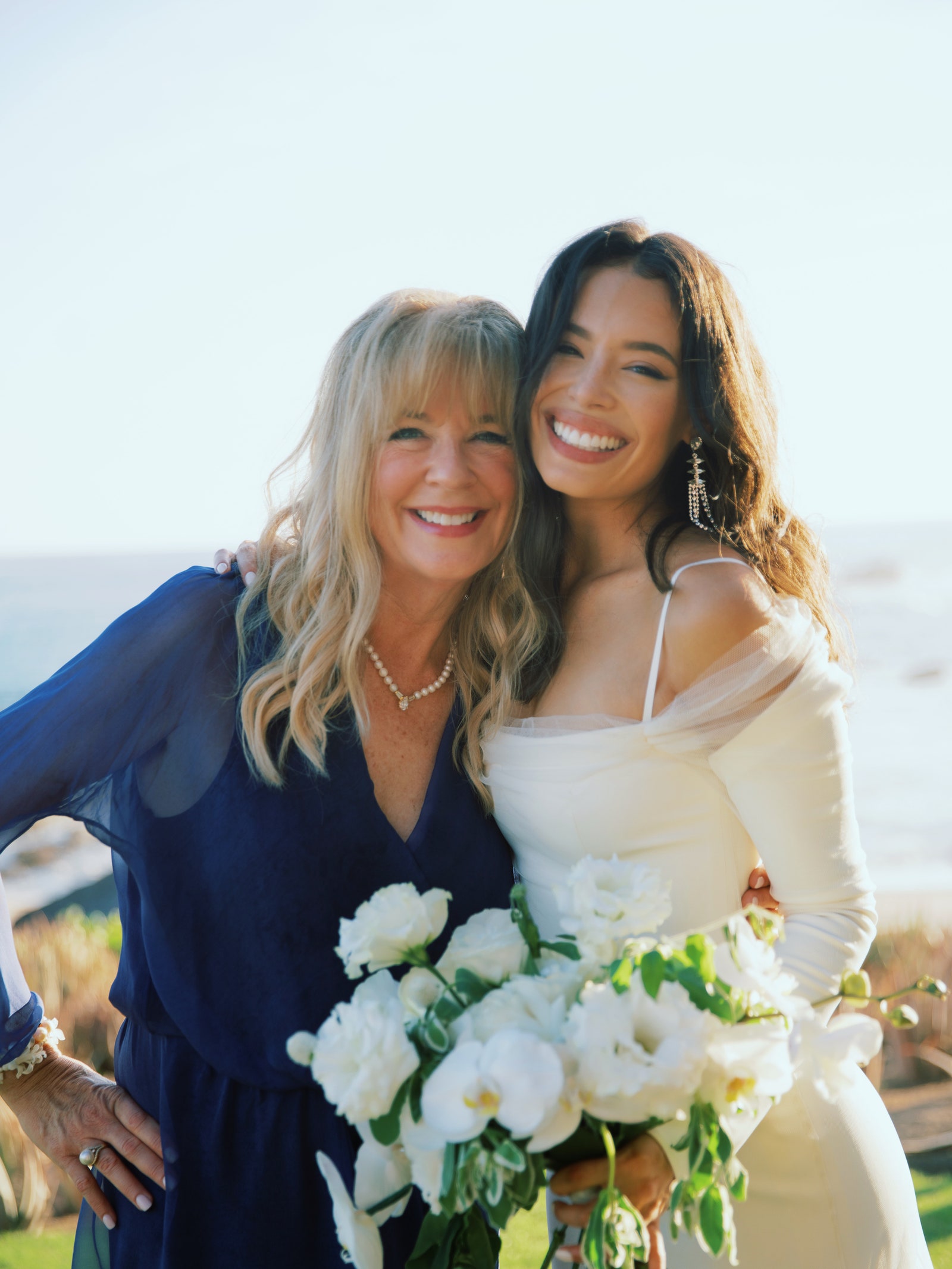 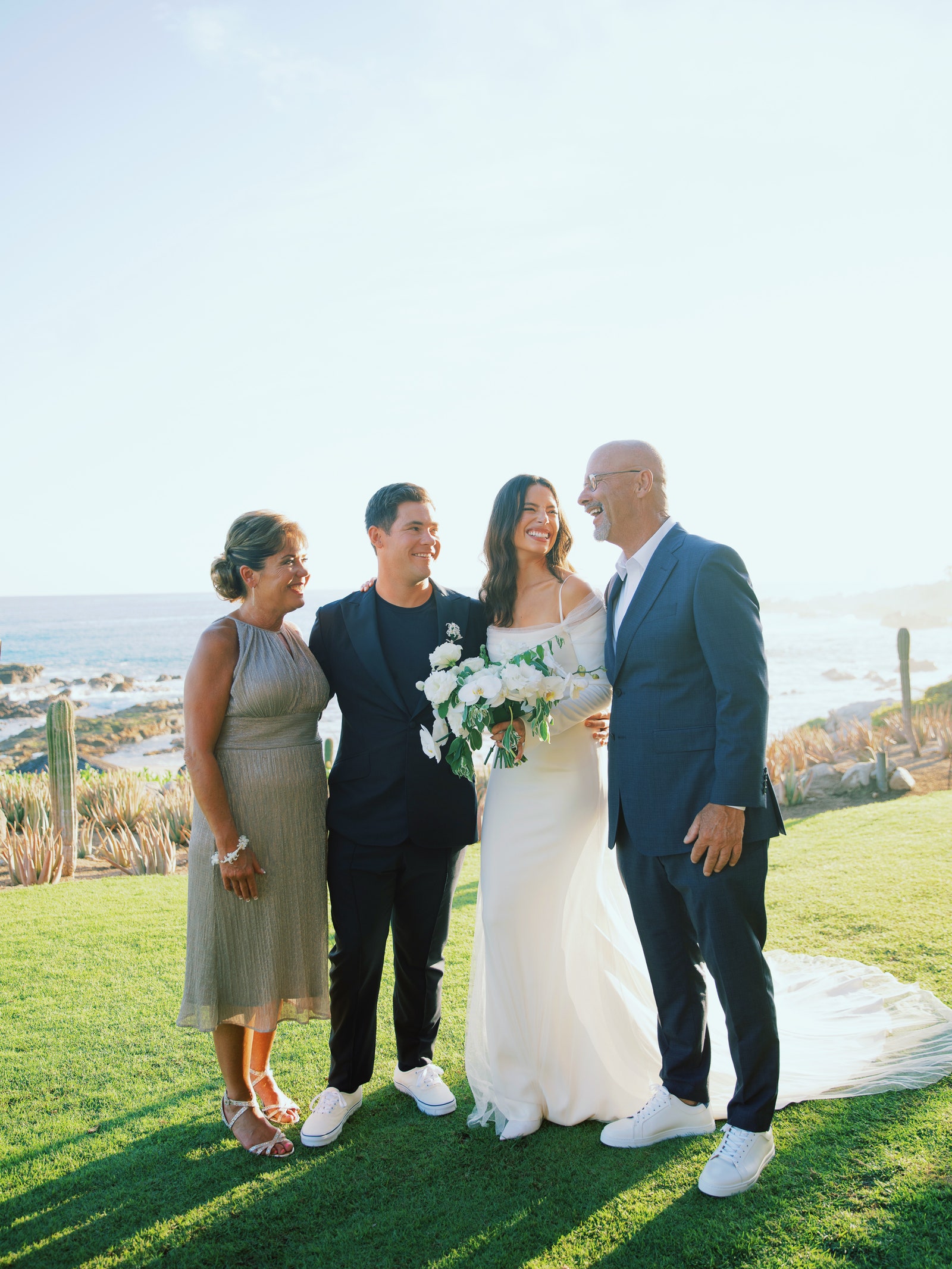 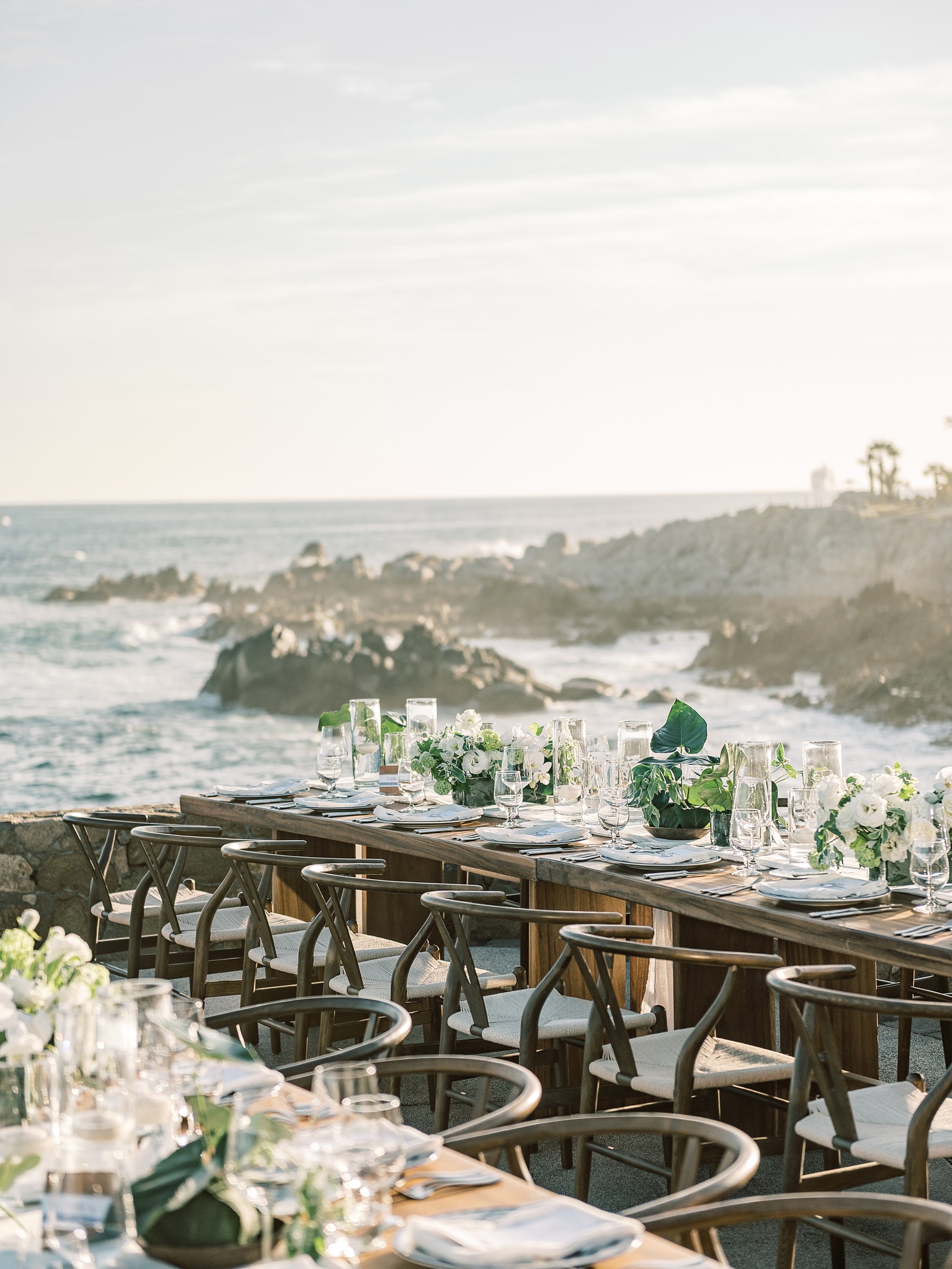 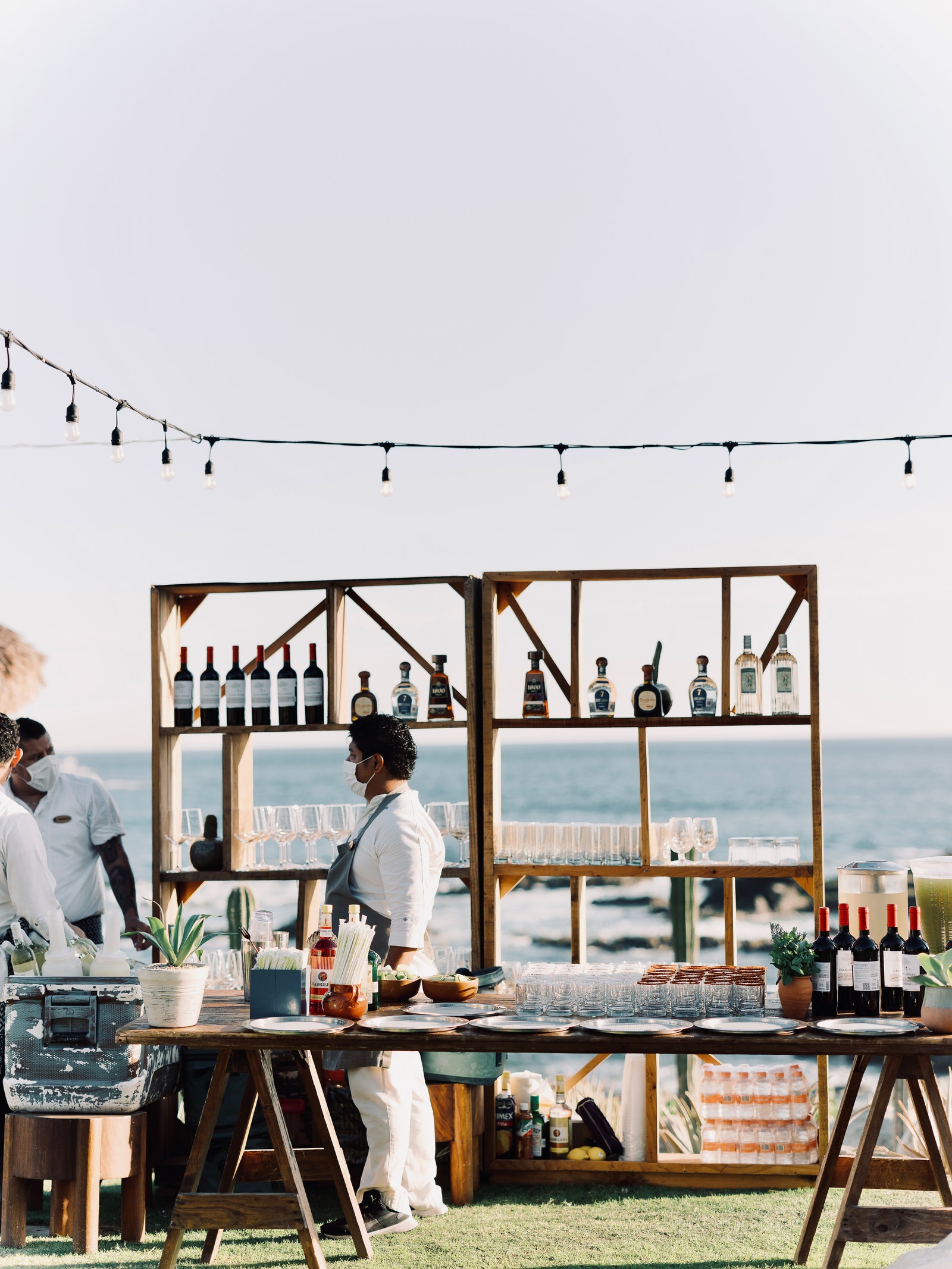 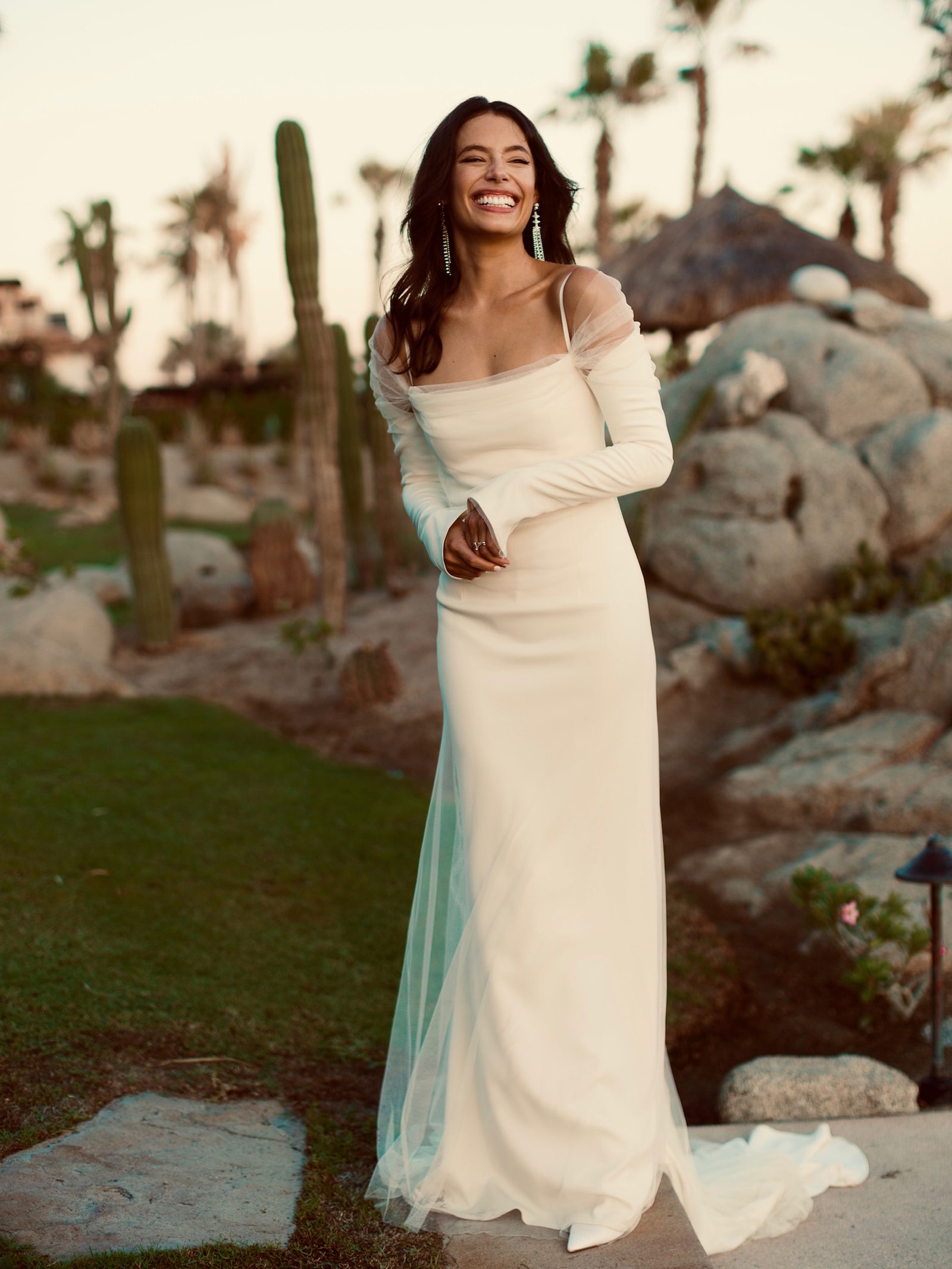 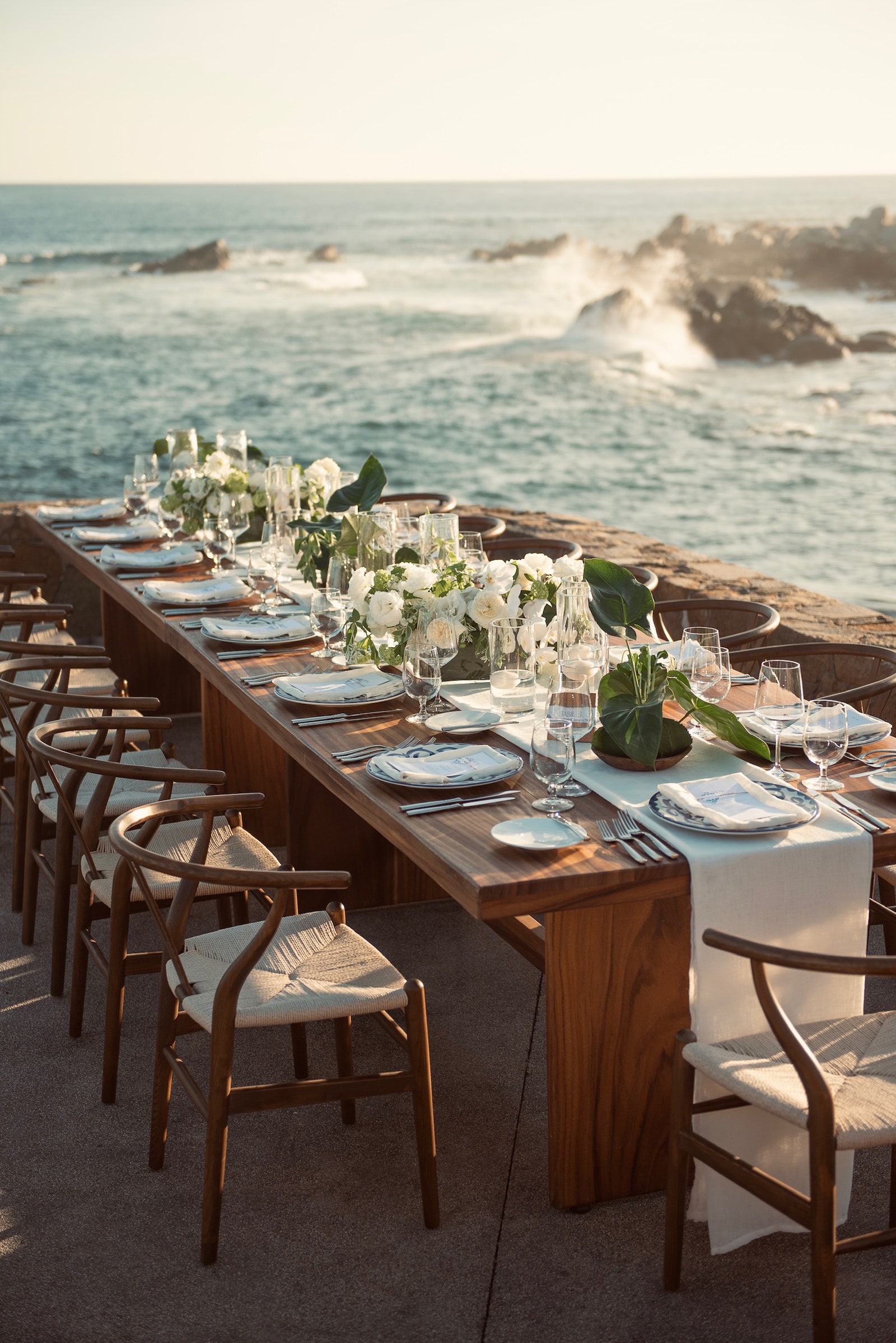 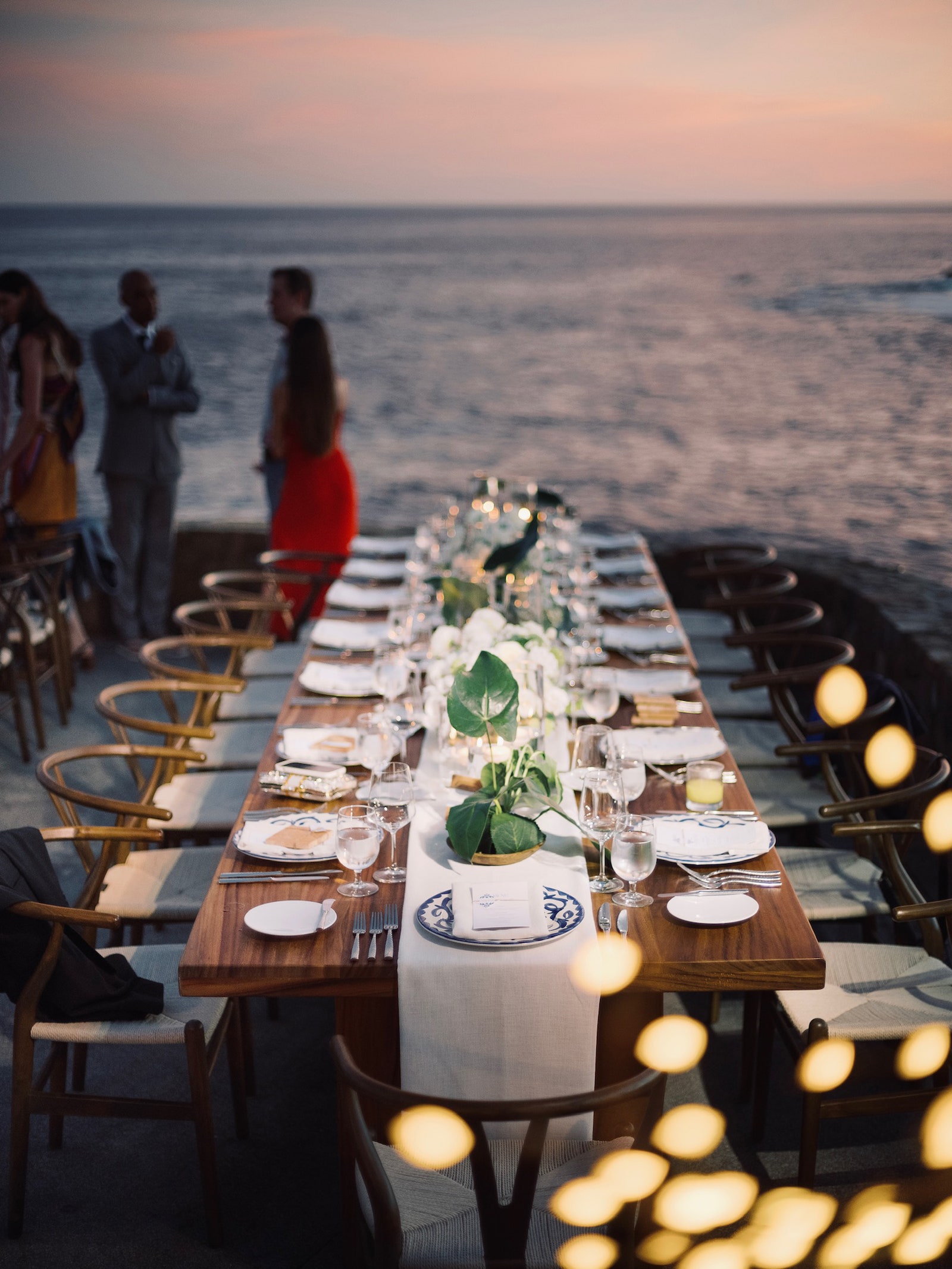 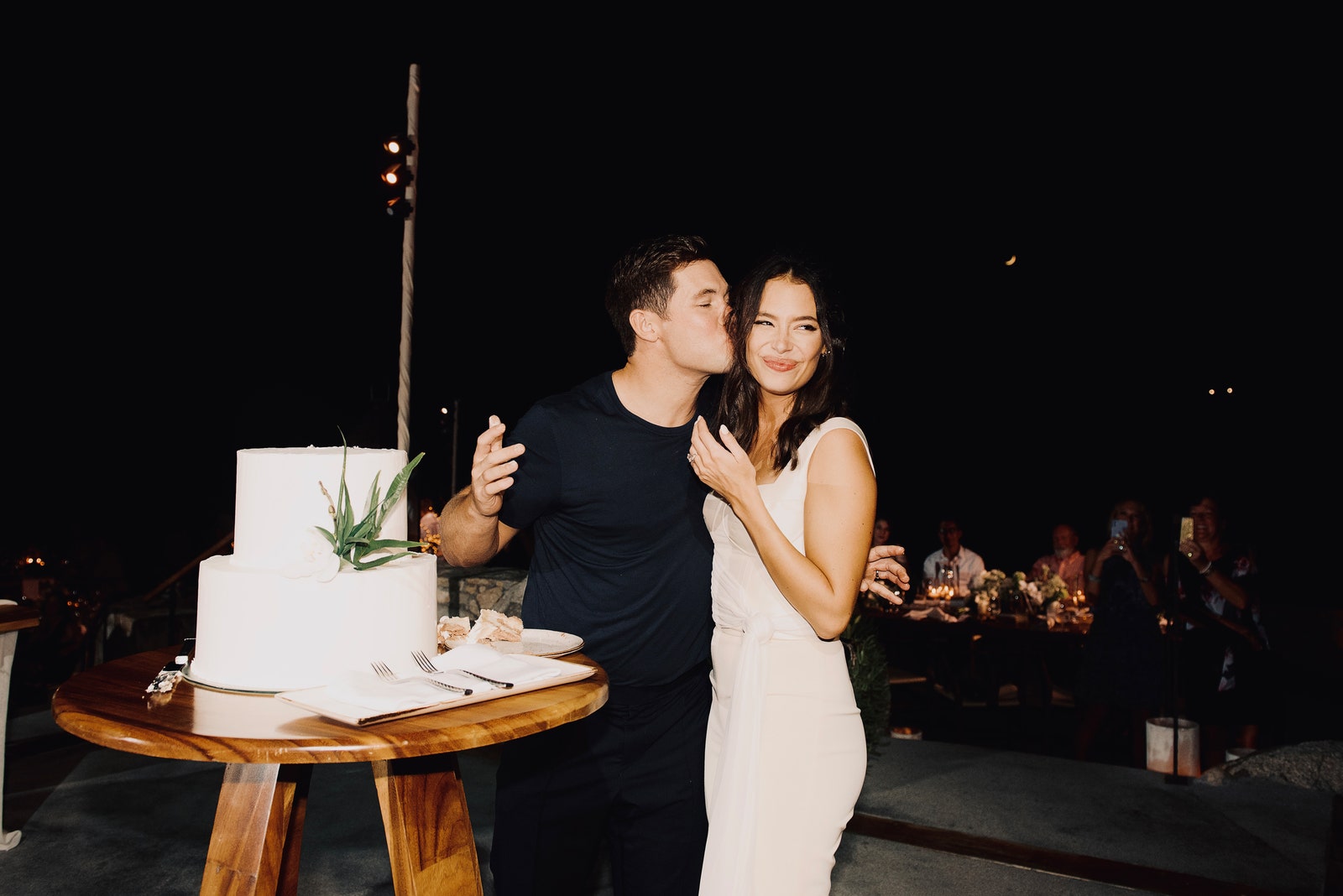 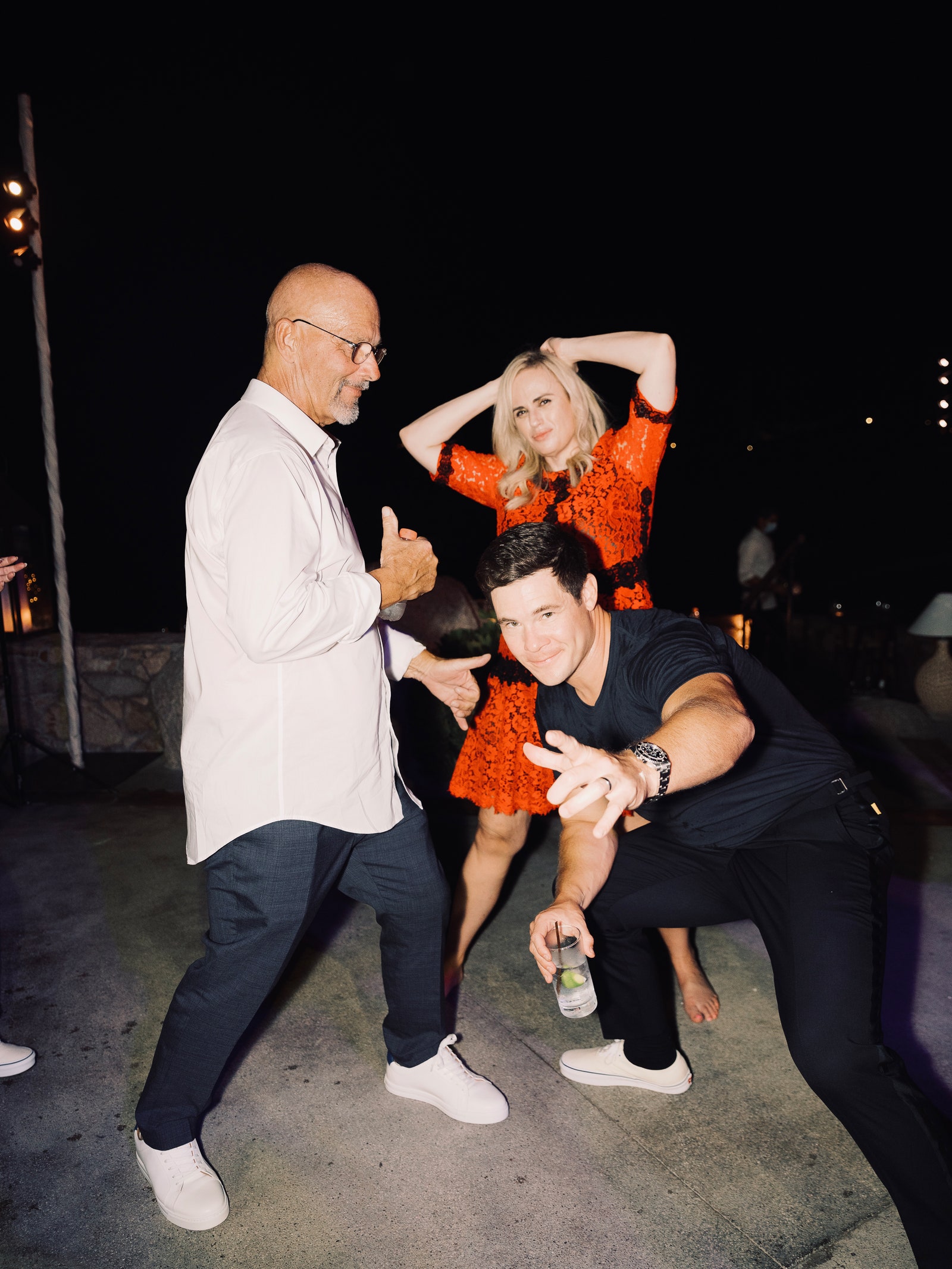 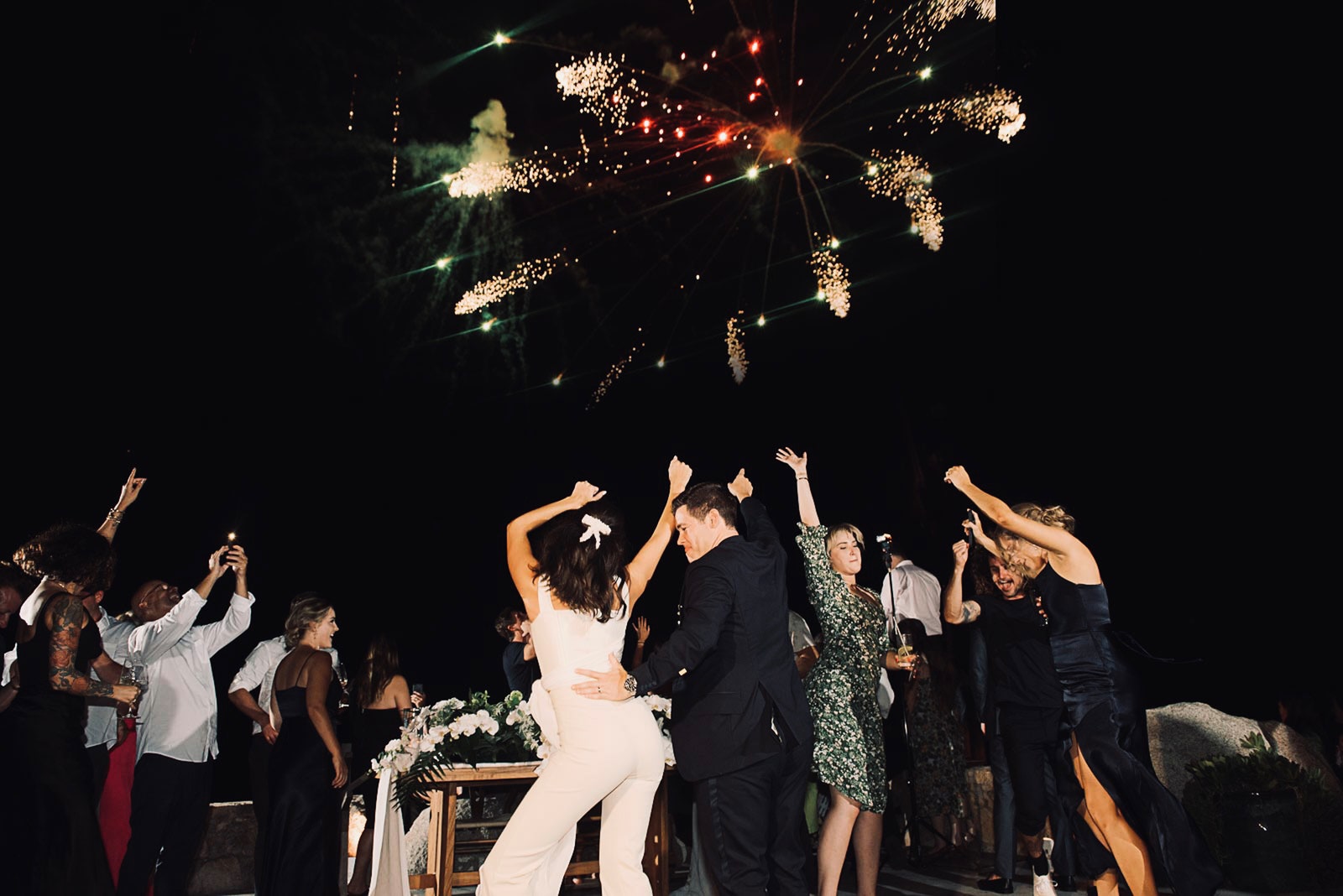