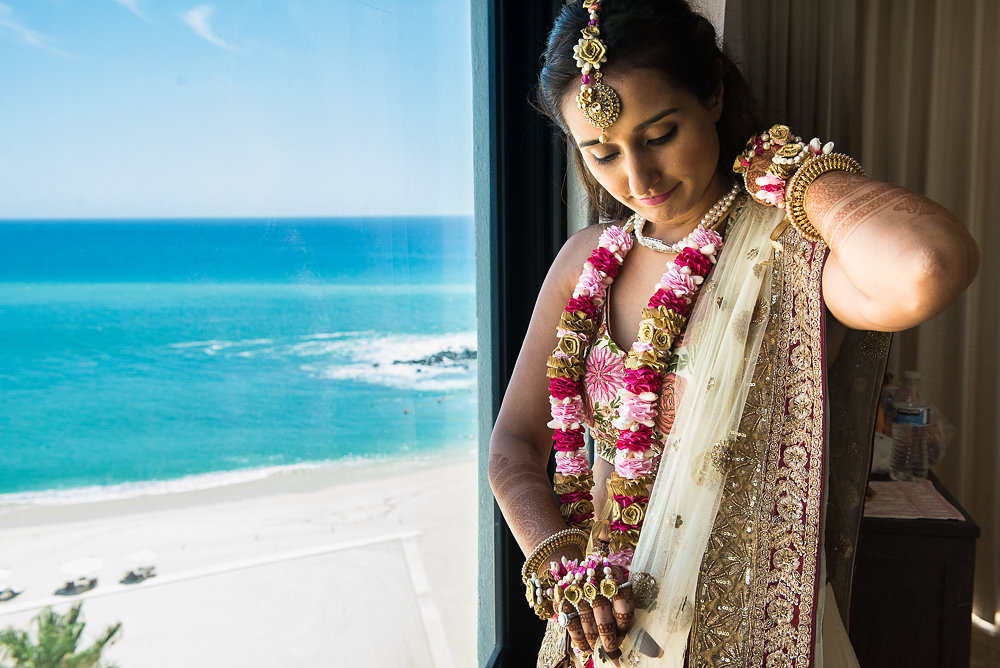 The Tradition of Mehndi

WE RECENTLY FINISHED planning and designing Yogeeta and Sanjay’s incredible Indian wedding celebration! It was a long weekend of special events, parties, gatherings, and sacred ceremonies. All beautifully planned and coordinated by Elena Damy Destination Weddings including the sangeet and outdoor ceremony. We have planned many other Indian weddings in our career, but #YoSippy as this wedding was dubbed, was something special. Each event was steeped in tradition and meaning but in the couple’s own unique style. Elena and Carlos, as well as the rest of #TeamElenaDamy, was truly touched by the vibrancy of the celebration and the meaning behind each tradition. So, we’ll be sharing some of the beauty and symbolism here over a series of posts. Beginning with the Mehndi. 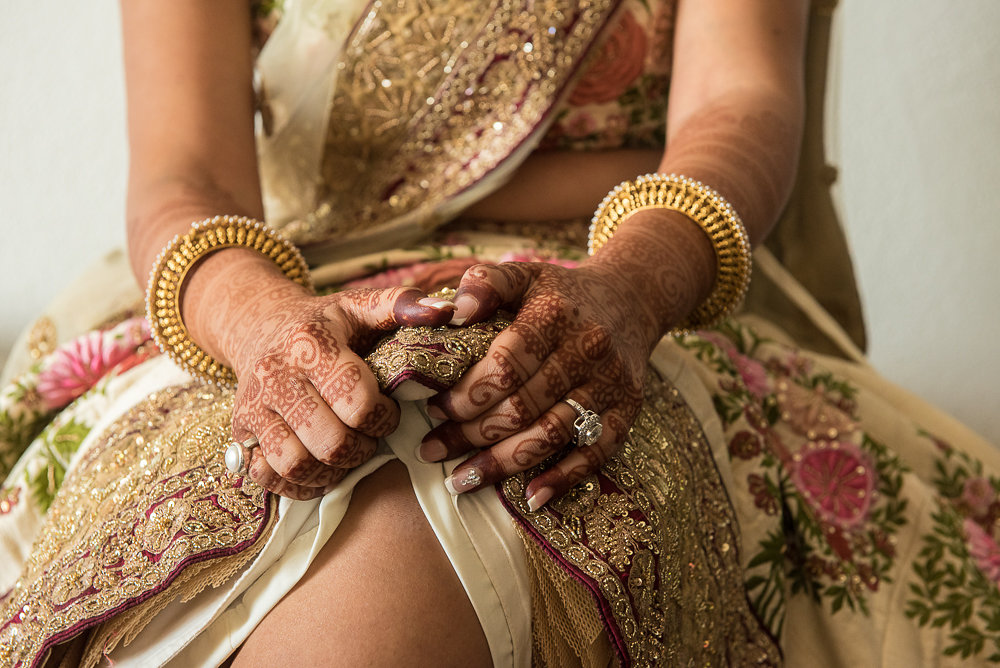 What Exactly is Mehndi?

To be honest, having had some experience with Indian weddings, none of us were surprised that Yogeeta would have her hands and feet decorated in henna designs. But to watch the bride, as well as the other women in the bridal party, get painted with mehndi was incredible. As was the lovey camaraderie shared amongst the generations of women taking part in the ritual. 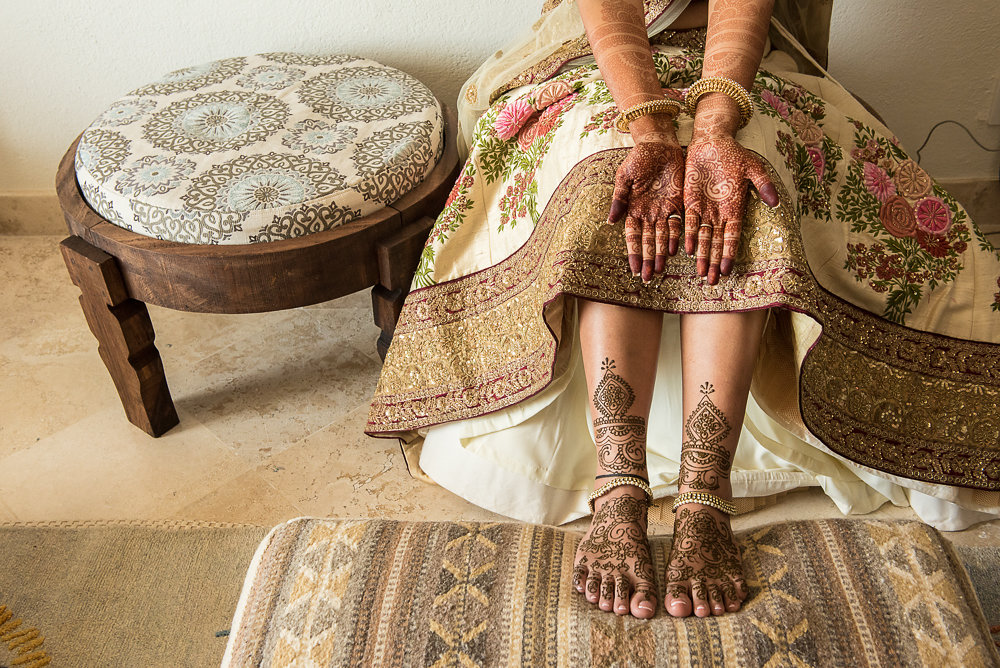 These intricate orange and brown designs, called mehndi, are not new to the western wedding scene. In fact, many women in the United States and Canada, as well as other western countries, have embraced the mehndi tradition as a spiritual adornment at weddings. In both artistry and meaning, you can’t help but find them beautiful. But, watching each design get hand-painted with such skill and reverence made us think, where did these designs come from? What does the tradition actually mean? Well, here’s what we learned. 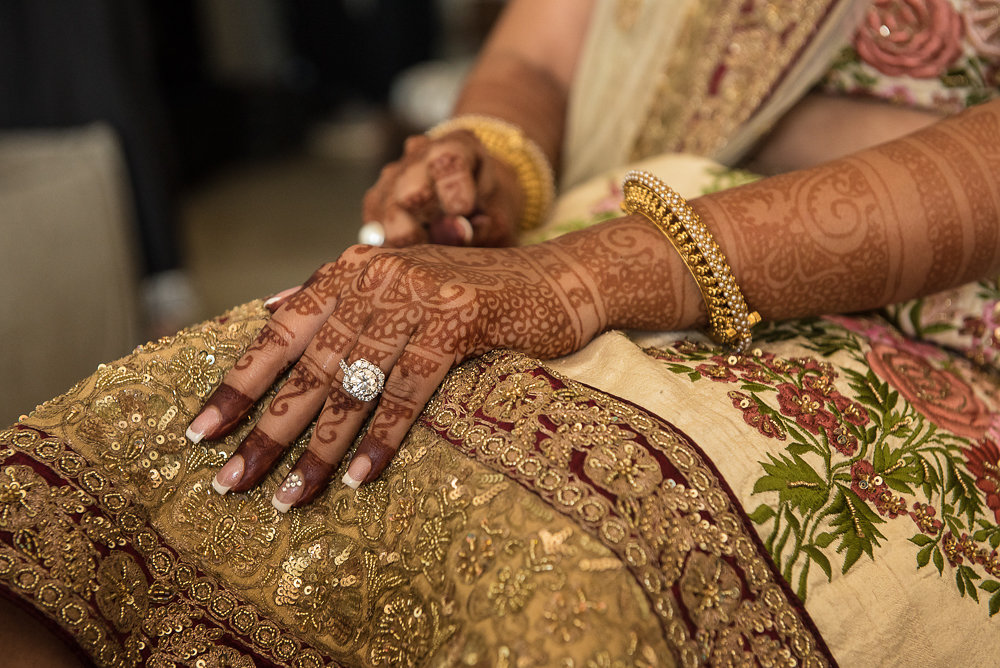 The Meaning of Mehndi

The Hindi word “Mehndi” or “Mehendi” is used to describe the henna plant, the art of henna painting, and the specific designs used in the actual paintings. It’s an ancient art form used for beautification and conditioning. Leaves from the henna plant is made into a paste which is used in celebratory rituals in many different countries, from Northern Africa to South Asia, the Middle East, Egypt, and, of course, India. A mehndi “party” is the pre-wedding celebration in Hindu (and Sikh) culture when the bride has the mehndi “stain” applied to her palms, back of hands, and feet. Many claim mehndi is the way to make the sacred visible to the naked eye, thus offering and receiving blessings from the divine through the practice. 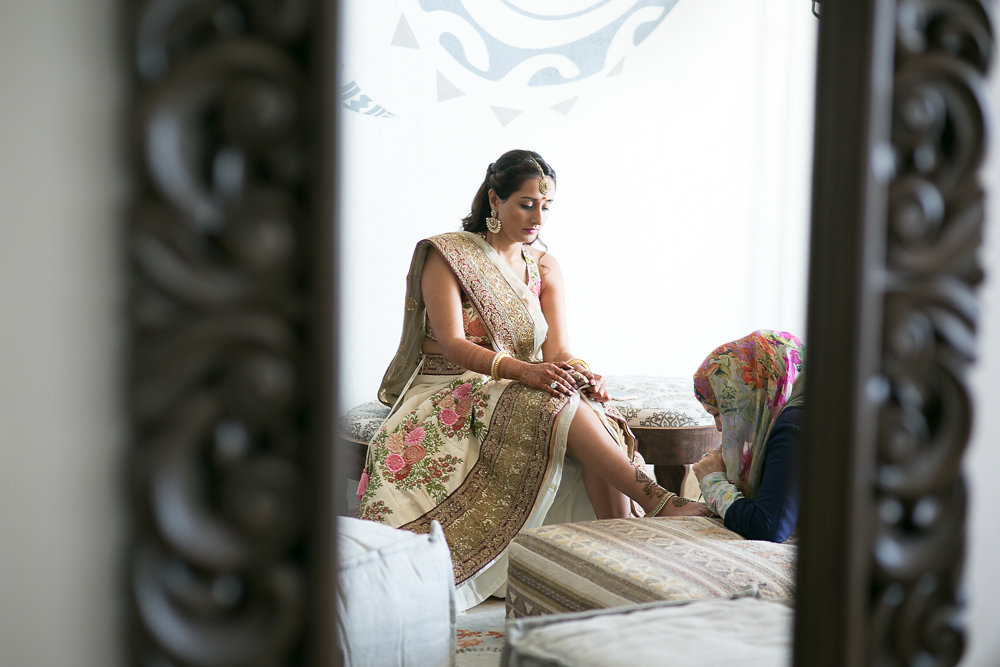 The Art of Applying Mehndi

For thousands of years, yes THOUSANDS, the people of India have been devoted to the art of ornament and adornment. Rigorous study, experimentation, and craft are exemplified in the mehndi designs. In India, the quest for the perfect ornament or adornment is tandem to the quest to describe the human spirit. Through these designs, the spirit is made tangible. In India, the beauty of a woman’s creativity is celebrated through the practice of mehndi. 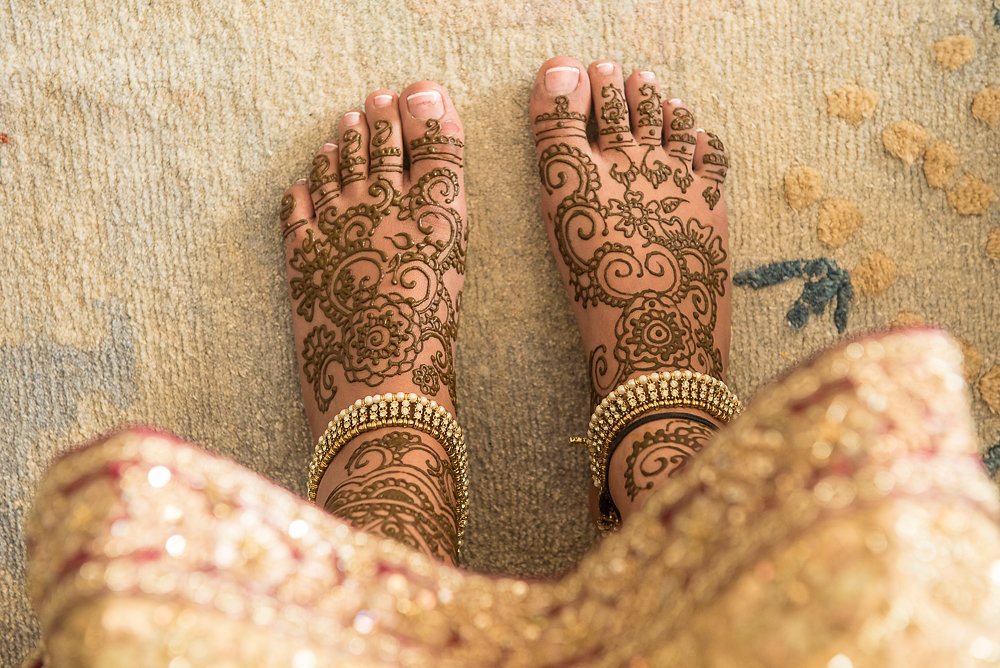 Of course, in addition to their timeless beauty, Mehndi is used as a way to predict the future. Usually about love, marriage, and children. How those predictions are offered to go beyond the style or design of the drawings. For instance, the color of the henna, its quality and intensity, can signal good or bad luck, the outcome of a marriage or the love felt between two people. And, if a dot of henna on a man or woman’s forehead stains then the person will be fortunate. If the color of the henna on a bride’s hands is a dark orange, it means that marriage will be a long and loving one. The darkness or lightness of the color also reveals the level of protection that the gods will give the couple during their union. And, somewhere in the designs, the groom’s name is usually hidden. And so forth. 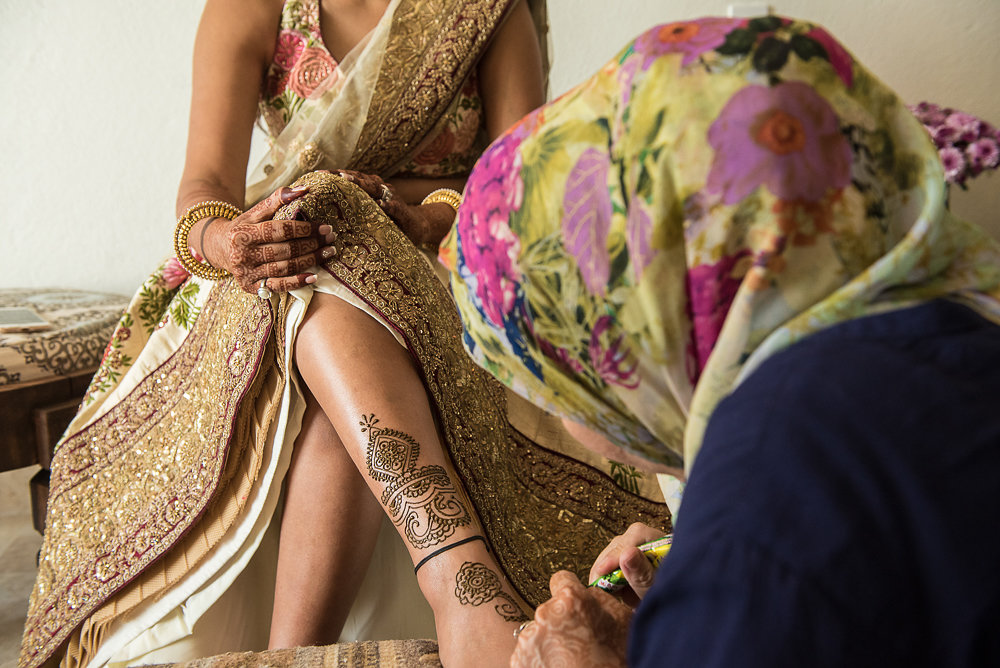 Where the Mehndi Happens

Typically held the day before the wedding ceremony, the mehndi often has a lounge feel, with colorful, comfortable pillows, plenty of food and music, and constant energetic chatter! Usually only women—on both sides of the aisle—attend including the mothers, bridesmaids, future sisters-in-law, and other close family members and friends. Traditionally, mehndi parties take place in the bride’s home. However, as with Yogeeta’s mehndi, it is very common to host the party in a chic restaurant, off-premise venue or hotel suite. And because mehndi applications can take a long time – they’re hand-painted!!! – entertainment is a must. There’s generally Indian music and dancing, and, traditionally, guests get up and perform to keep the bride entertained. 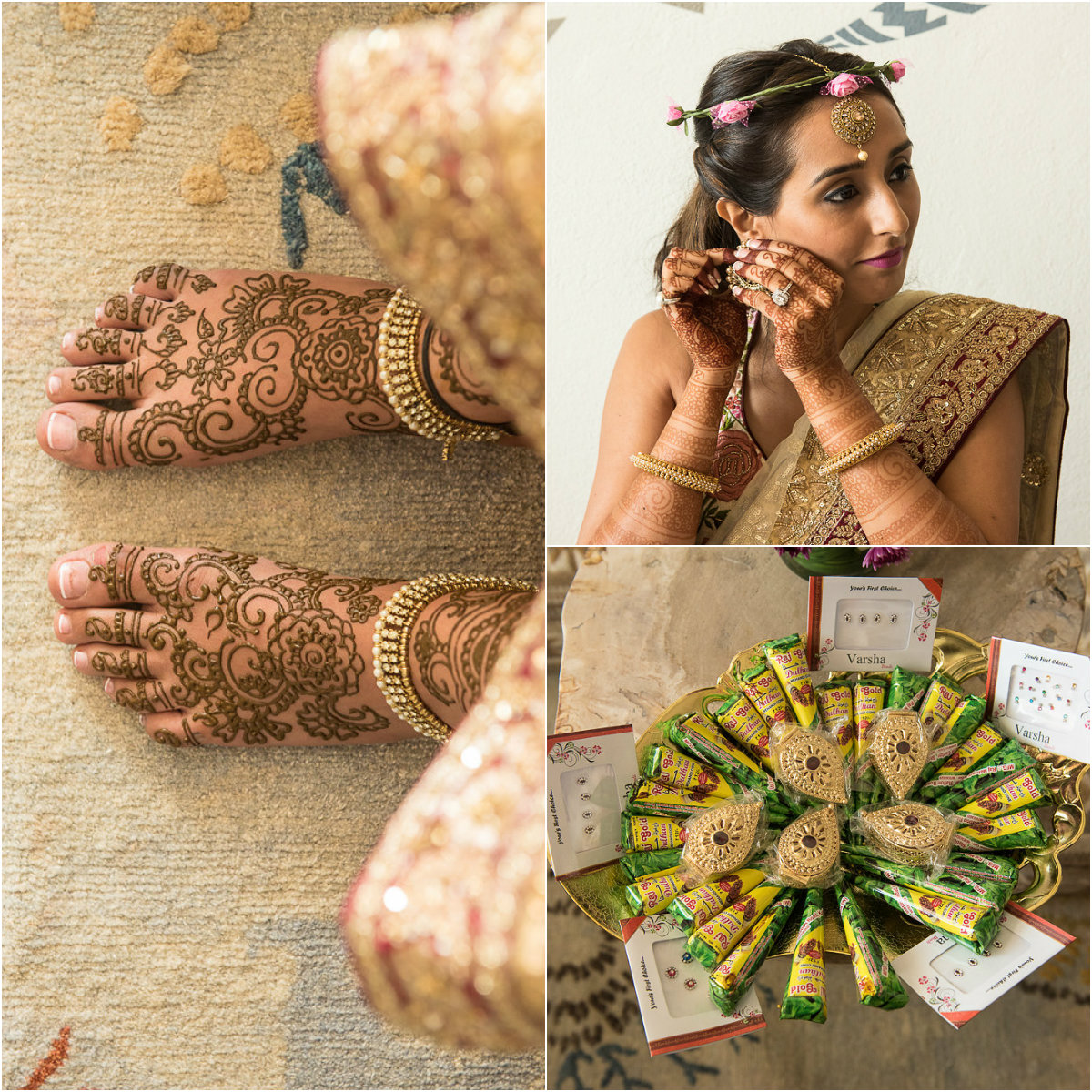 Mehdni is a Beautiful Tradition

Bottom line. Mehndi is a beautiful, bonding ritual that begins the wedding celebrations off in a joyful way. Out wedding planning team was truly honored to be a part of Yogeeta’s mehndi, and to get their own hands painted!

On behalf of Team Elena Damy, we wish much luck, love and many blessings to the bride and groom! Here are more photos of the mehndi and the celebration that takes place around it… Enjoy! 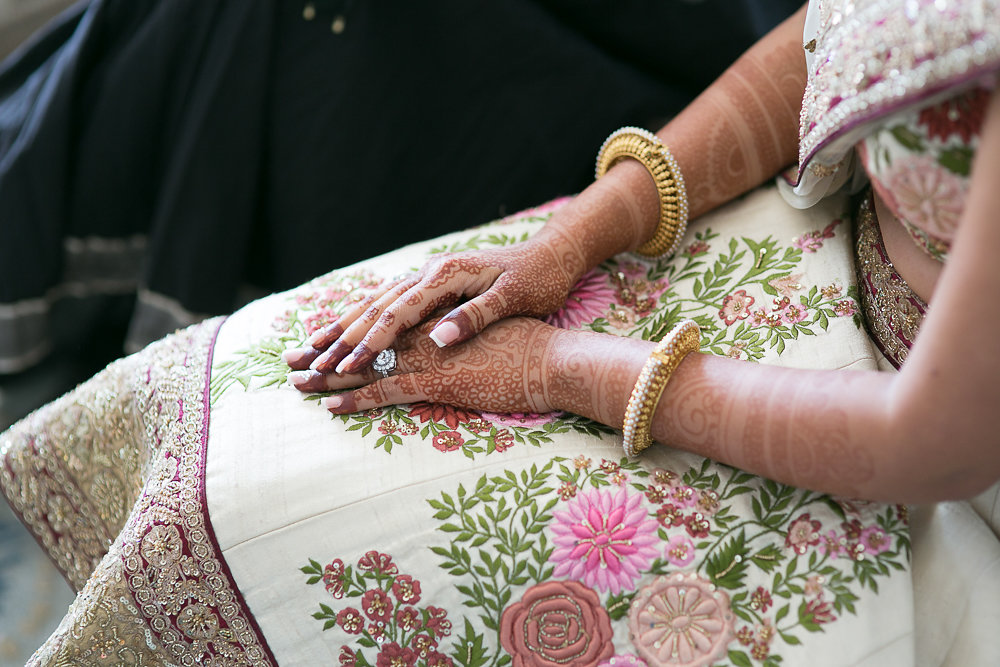 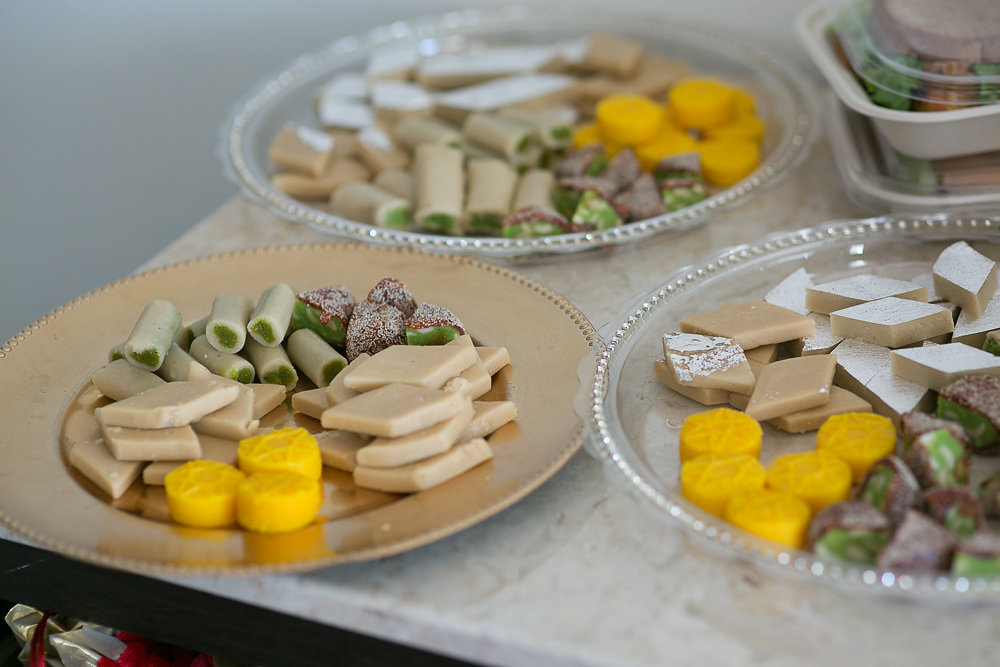 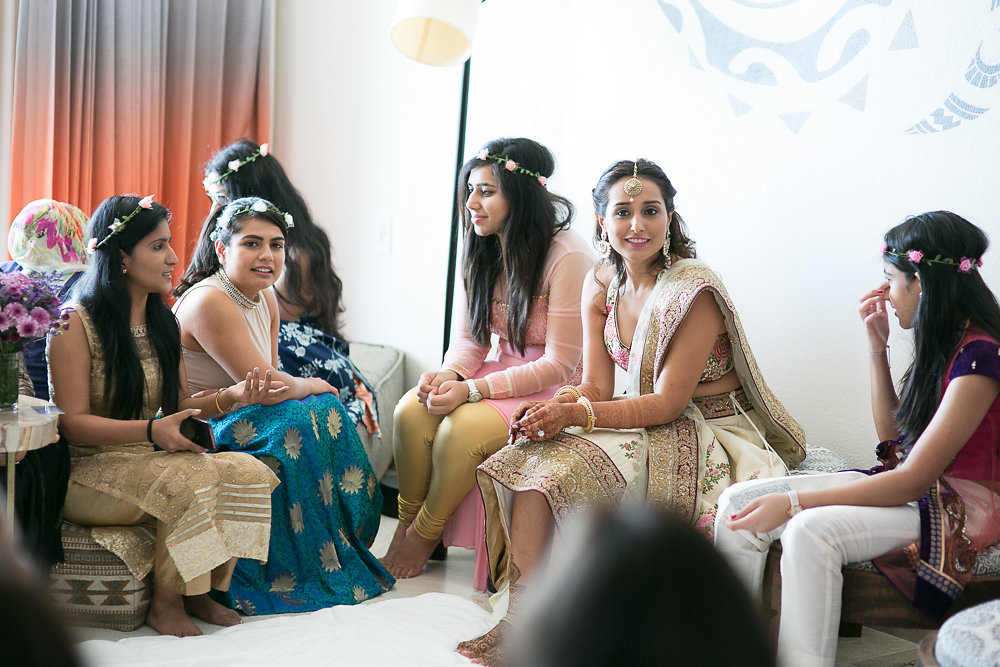 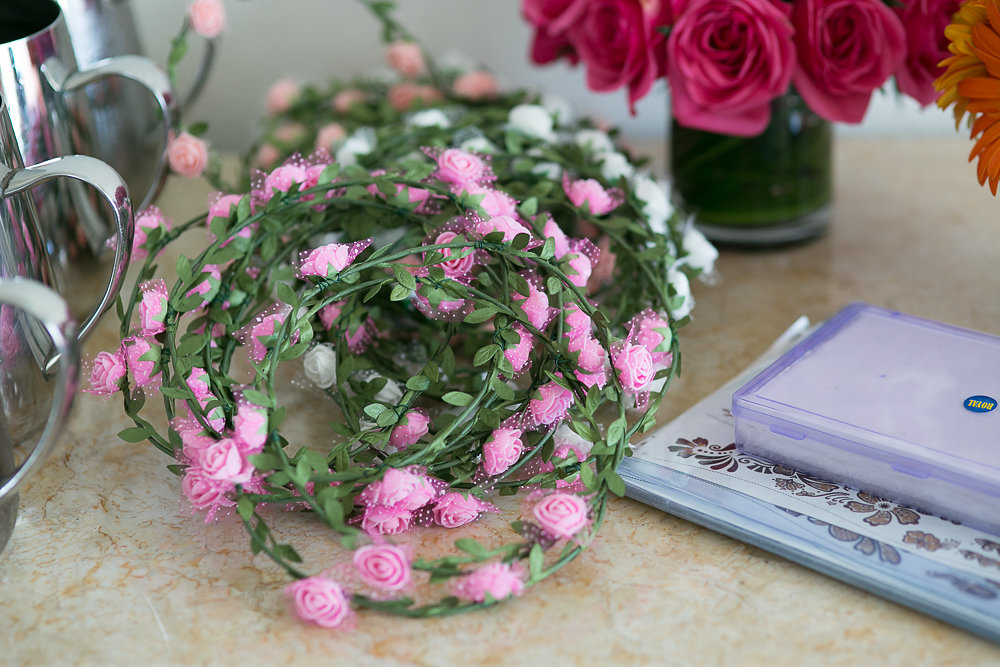 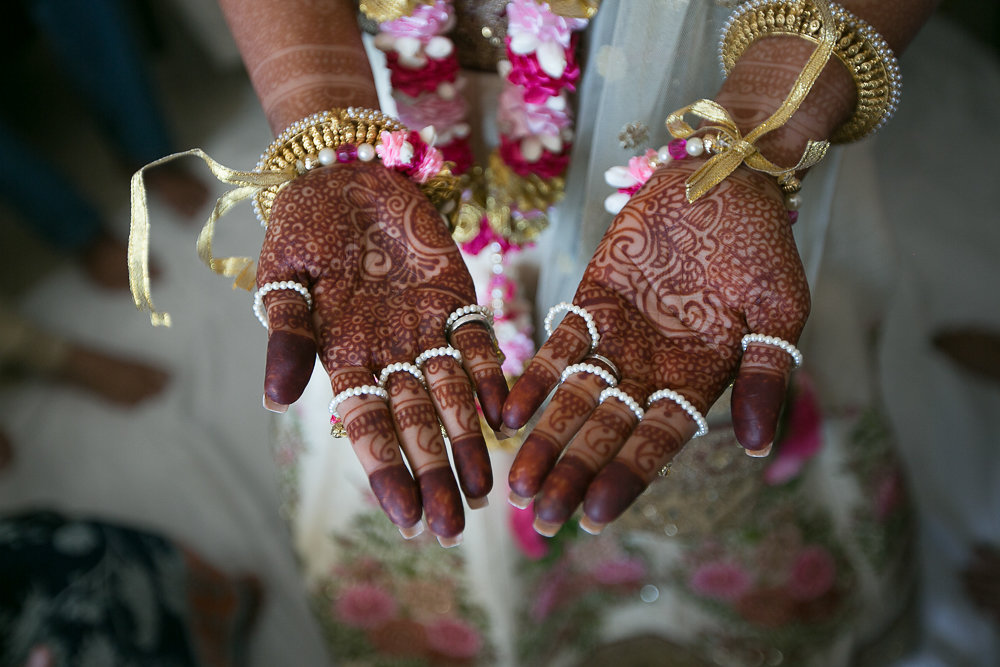 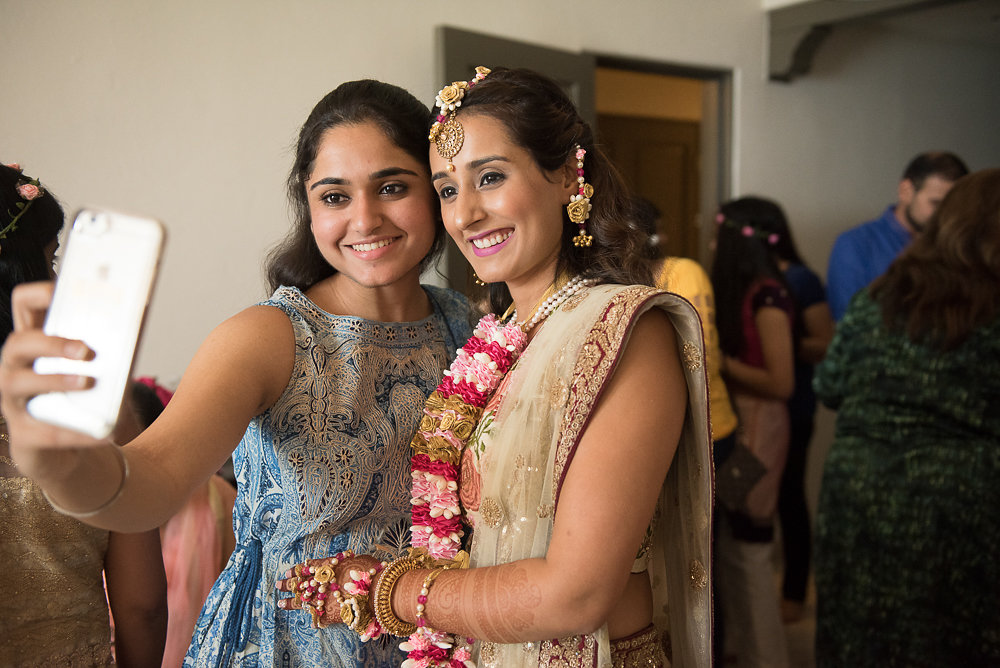 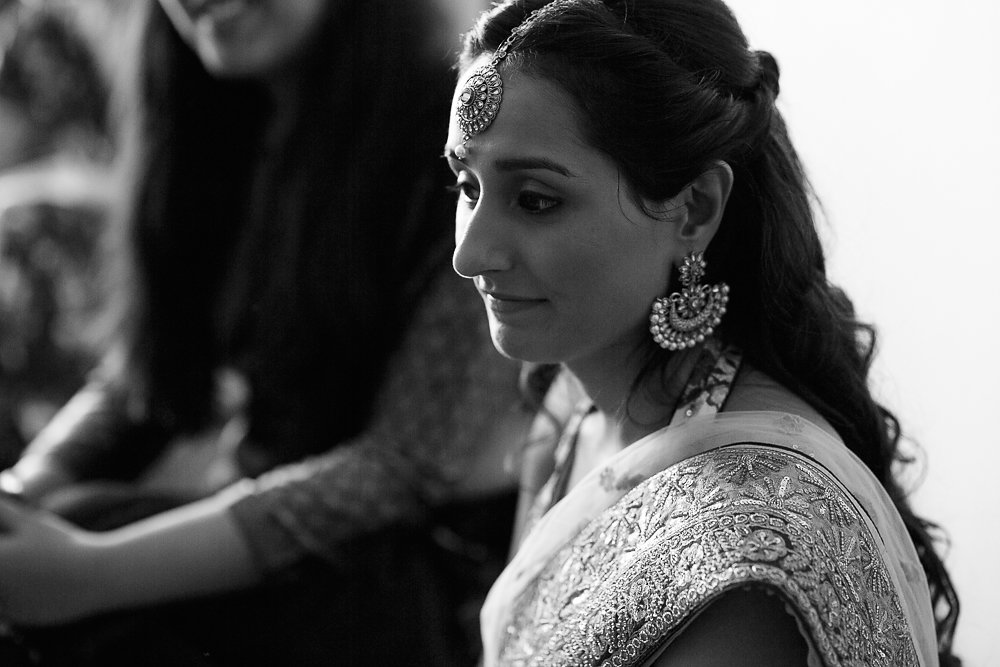 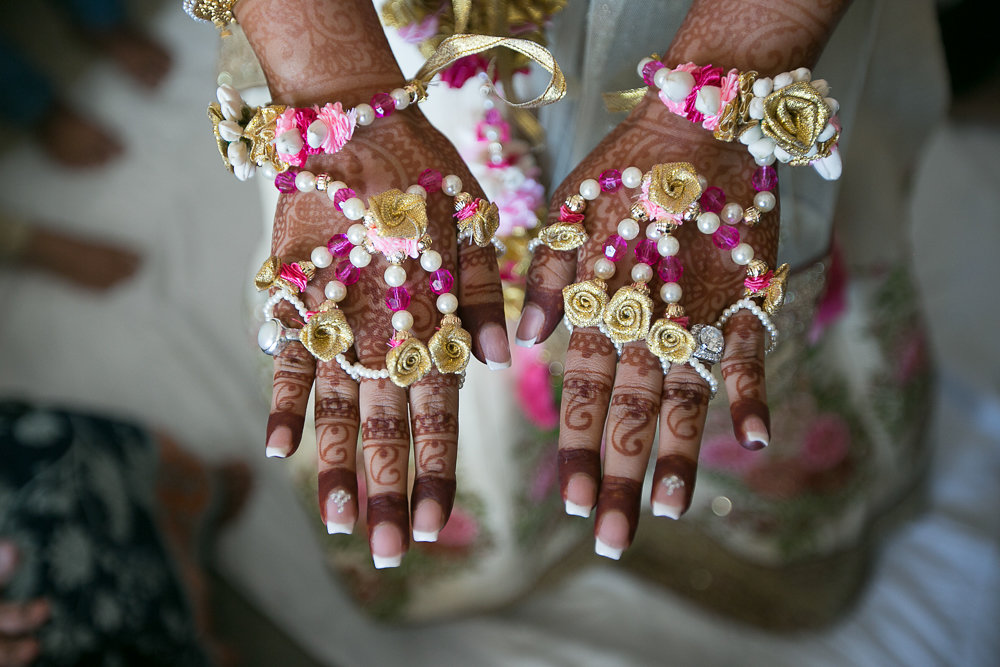 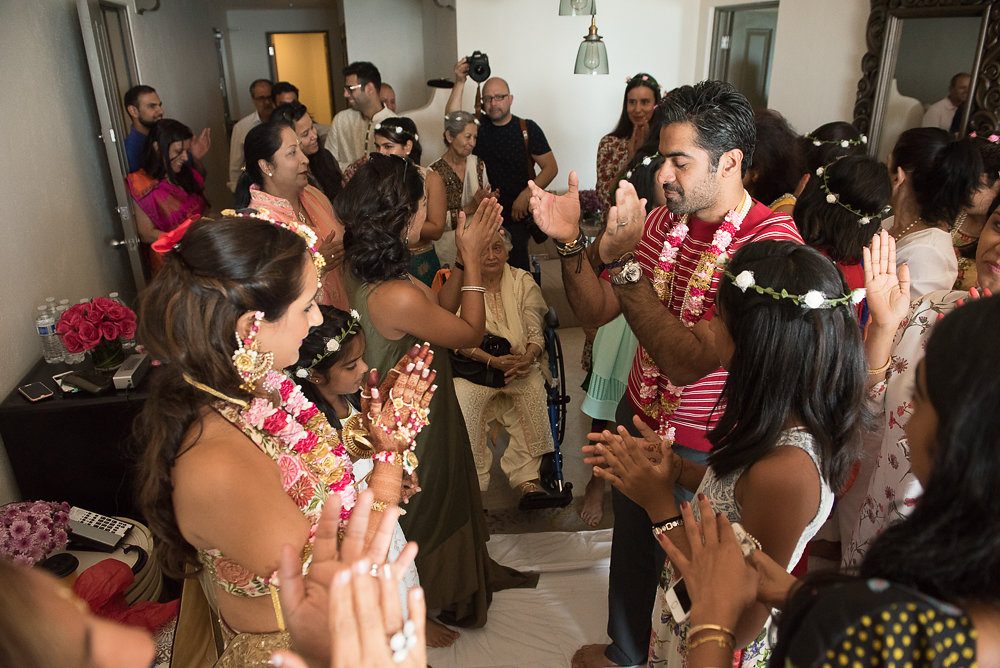 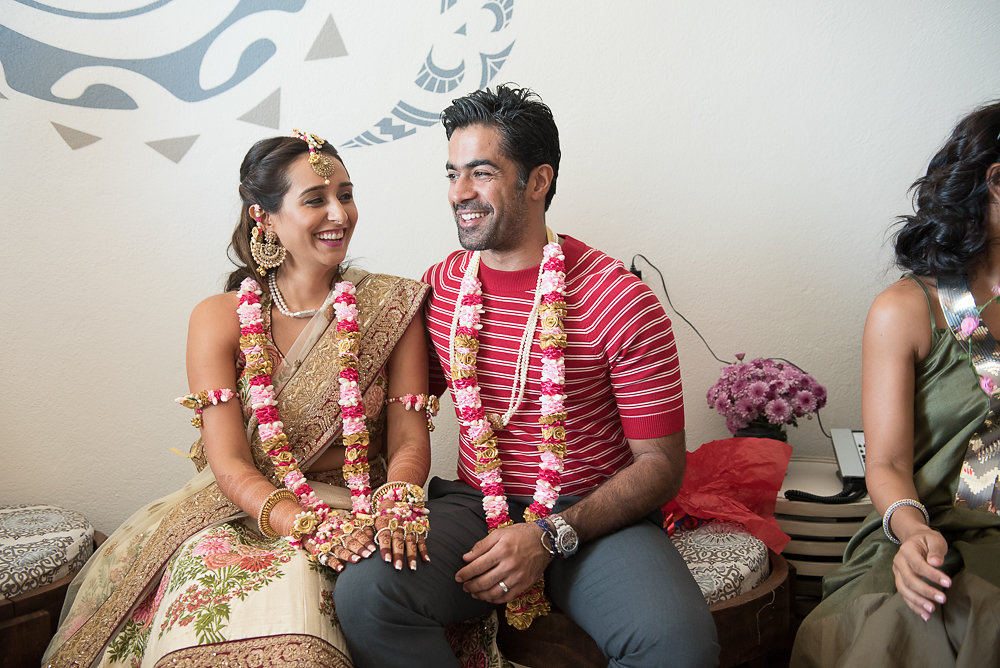 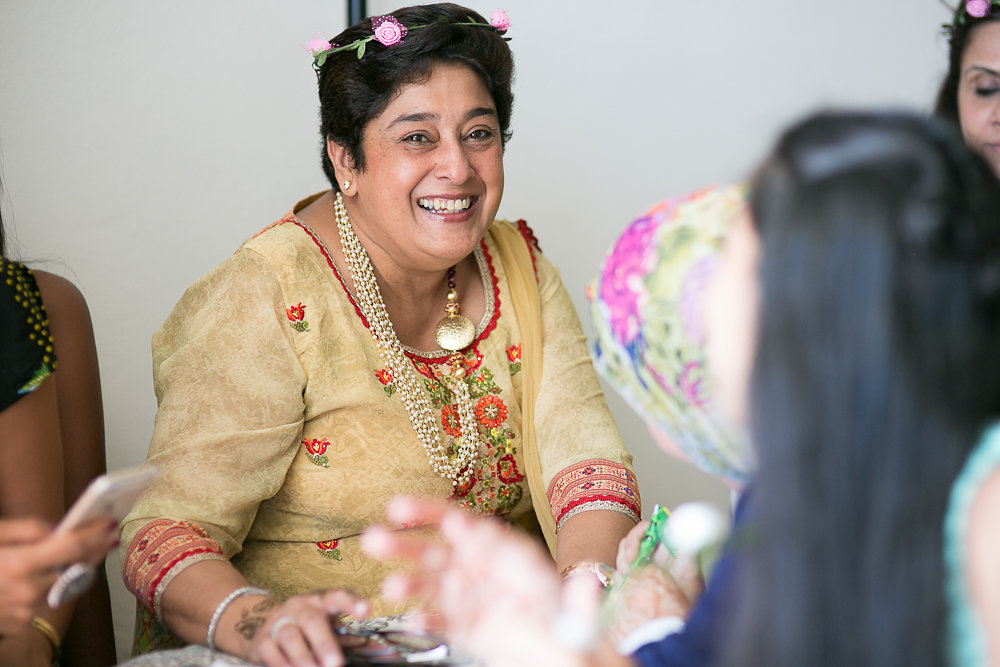 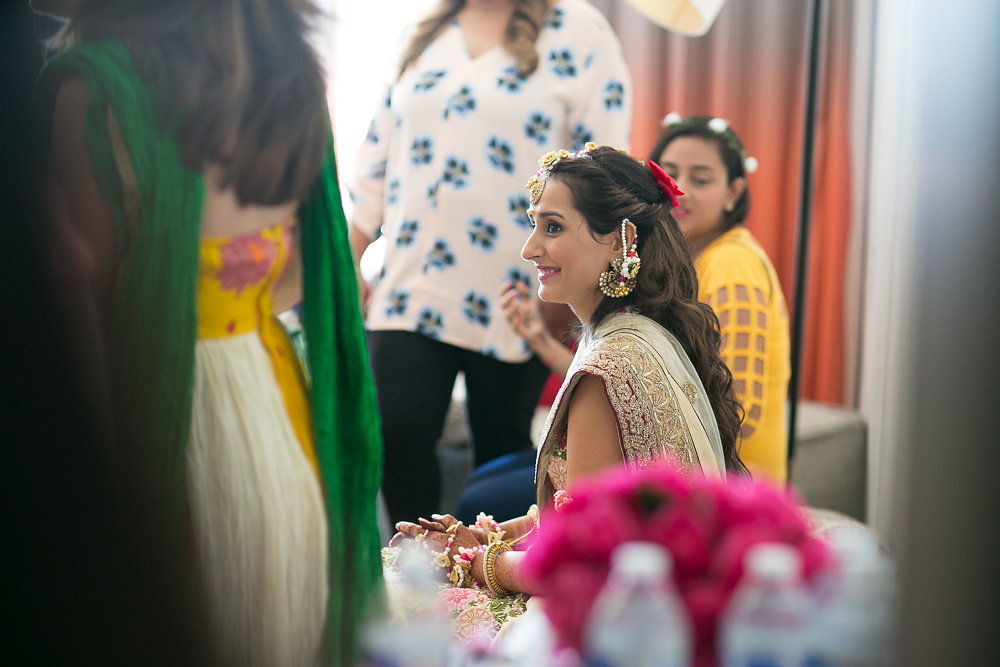 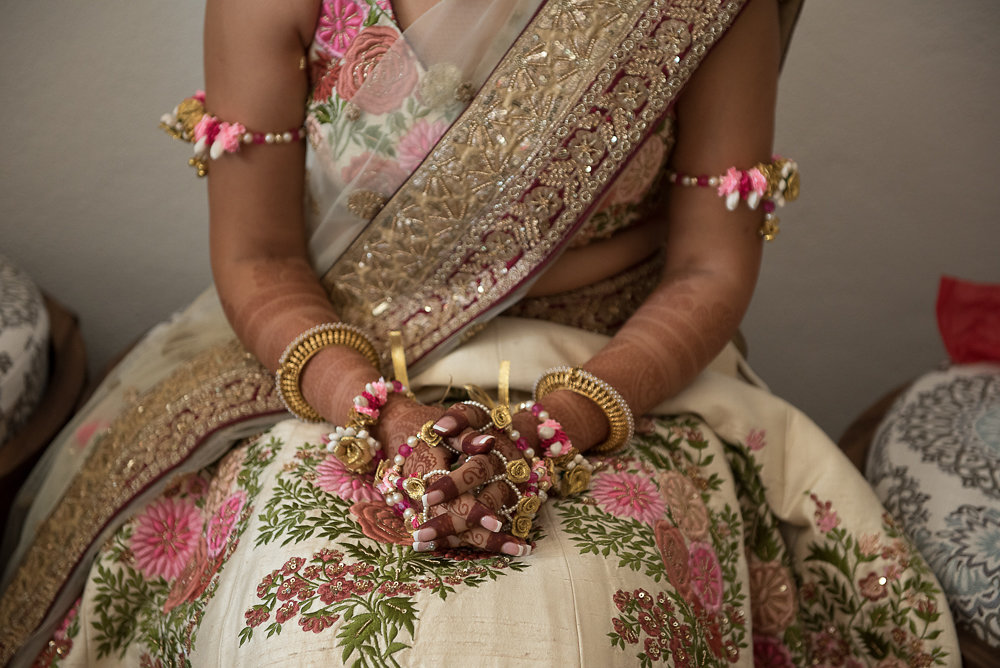 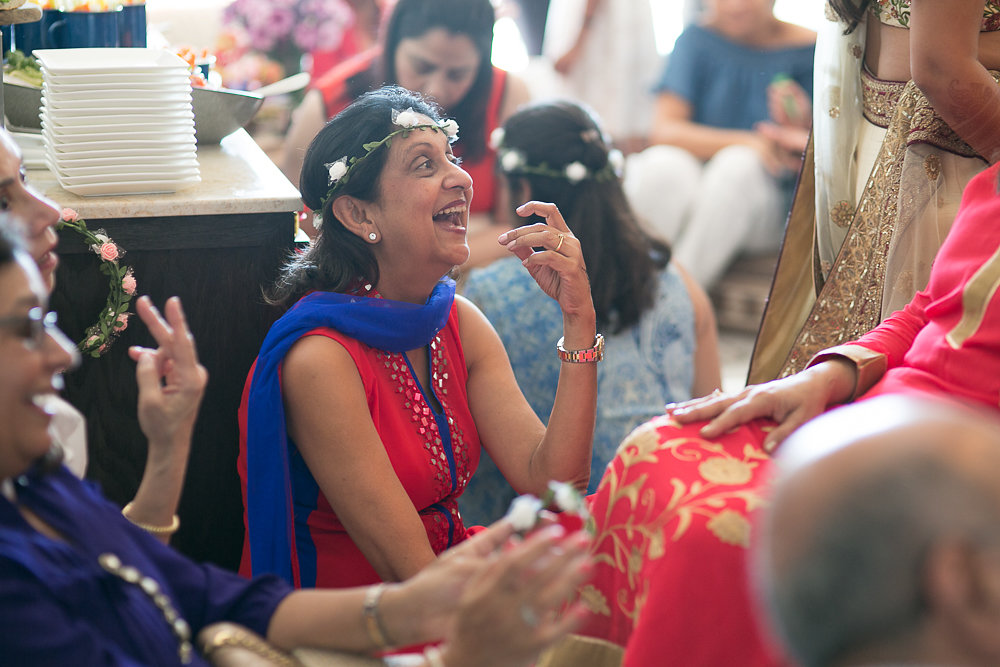 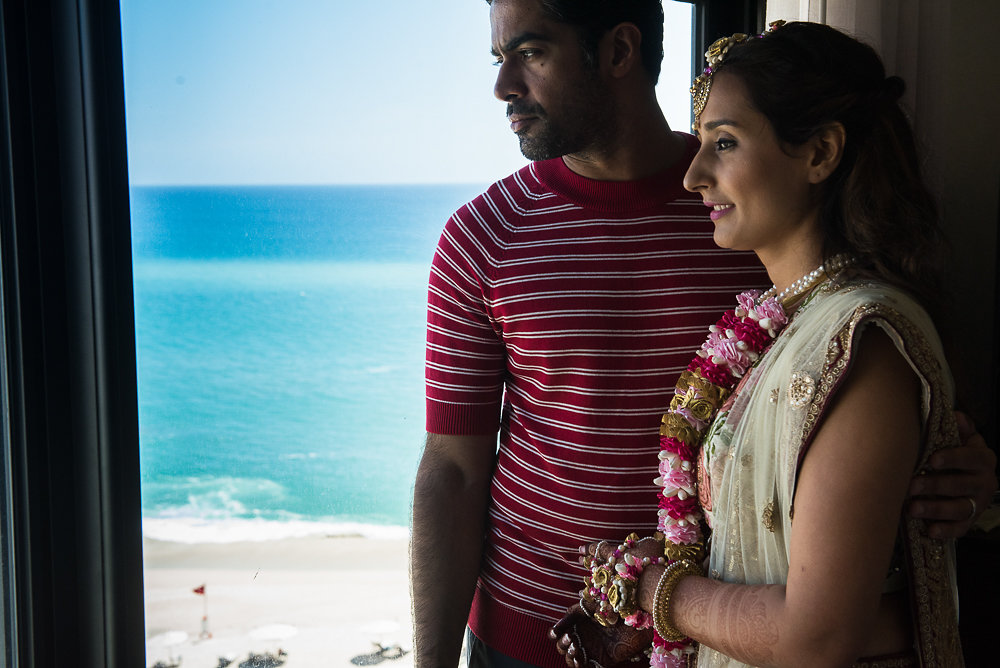 See more of Sanjay and Yogeeta’s beautiful Baja wedding weekend in these other blog posts: Sangeet and Outdoor Wedding Ceremony.